‘Winning with kids’ – Class of ’92 apartment building opens in Manchester 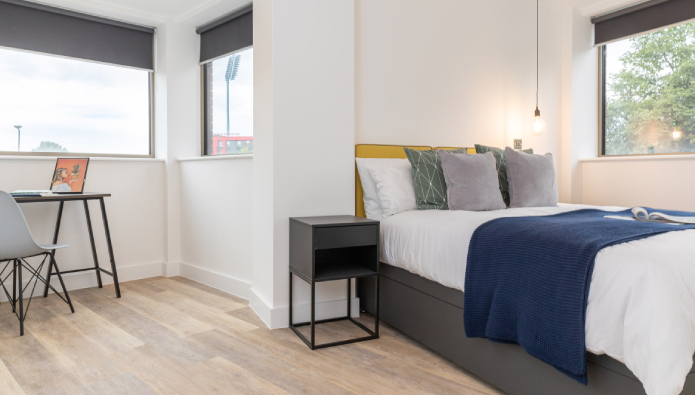 Despite the interruptions caused to the property industry by Covid-19, the firm says the development has been delivered on time with no delay to the first residents moving in.

Throughout the development, property developer Beech Holdings worked closely with UA92 to make sure that the apartments delivered the kind of homes those studying at UA92 wanted.

Gareth Smith, director of student affairs at UA92, said of the collaboration: “UA92 is delighted to be recommending Academy Apartments to our students. We know the accommodation provided by Manchester Apartments is good-quality, safe and brilliant for our tenants. Manchester Apartments have given us peace of mind in terms of Covid-19, the apartments are completely self-contained with en-suite and personal kitchen facilities, so our students know their apartments are clean and Covid secure.”

Overall, Academy Apartments is made up of 90 high-spec, stylish properties, aimed at students and young professionals who are studying and working in and around Salford Quays and MediaCityUK.

Acquired in 2018, the building has been refurbished by Beech Holdings, the parent company of Manchester Apartments.

Formerly a disused office block, the building is now being described as an ‘energy-efficient, modern space for residents to thrive’. With Trafford continuing to go through a significant period of regeneration and investment, Academy Apartments is positioned to provide homes to ‘what is and will continue to be a growing local population’.

Academy Apartments represents Beech Holdings’ second venture in the Trafford regeneration scheme, after the successful delivery of its Westpoint development.

First launching in late 2018, the company says Westpoint is one its most popular and largest developments to date.

Over the last 18 months, Manchester Apartments has worked closely with Trafford Council to deliver accommodation to those wanting to reside in the area. Westpoint consists of 317 apartments which are all now fully let for the third year running thanks to the growth and expansion of Trafford in recent times. 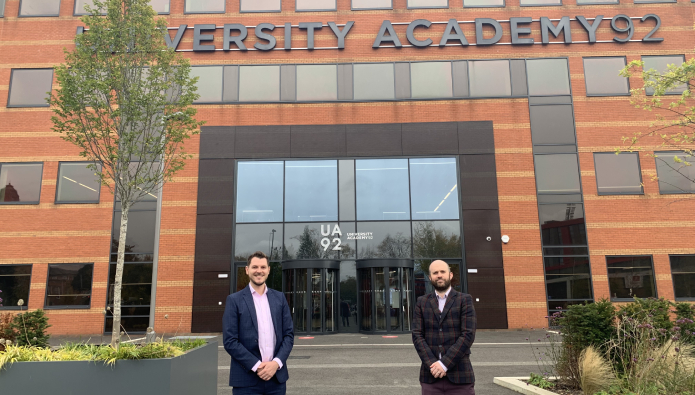 Jonathan Griffiths, director of property and building management at Beech Holdings, said: “Working with UA92 and Trafford Council has been a fantastic opportunity to put something back into the Trafford Area. After the success of Westpoint and its high occupancy, we knew Academy Apartments would be well-received.”

He added: “Our high-quality apartments offer students a great place to live whilst they carry out their studies. The apartments are self-contained units, with no shared kitchens or bathrooms, so Academy Apartments is extremely Covid-friendly.”

Stephen Beech, chief executive of Beech Holdings, also commented: “We realised a couple of years ago that Trafford stood out as an area with great potential for property development. The regeneration of Trafford has attracted amazing projects such as UA92 and we are incredibly proud to have contributed to the rejuvenation of the area. Academy Apartments is just one part of what we have planned in this area, on top of the £35 million already invested into Trafford by Beech Holdings.

The completion of Academy Apartments feeds into the plan from Beech Holdings and Manchester Apartments to ‘expedite the delivery’ of more than 1,000 apartments across the next two years, meeting the high tenant demand from Manchester’s growing population.

You can see a video introducing the Academy Apartments here.

In other development news, Southern Grove – a unique developer which prioritises the development of fully affordable housing by partnering with local authorities – has unveiled plans to deliver dozens of affordable homes within striking distance of the City of London as part of a £22million housing scheme.

The 45 units in Limehouse, a short walk from Canary Wharf, will be a mix of London Affordable Rent and Affordable Shared Ownership in an area of the capital where high property prices stop many putting down roots.

Limehouse sits in the borough of Tower Hamlets, where the average cost of a flat or maisonette stands at just under £440,000, compared to the national average of just £206,000.

The new development, to be known as Quinnat Yard, will bring the number of affordable units in the developer’s pipeline to more than 700. It will sit on the corner of Salmon Lane and Blount Street in a ‘highly desirable’ area of the capital, in between Mile End Park and Limehouse Basin, and just yards from the Regent’s Canal. 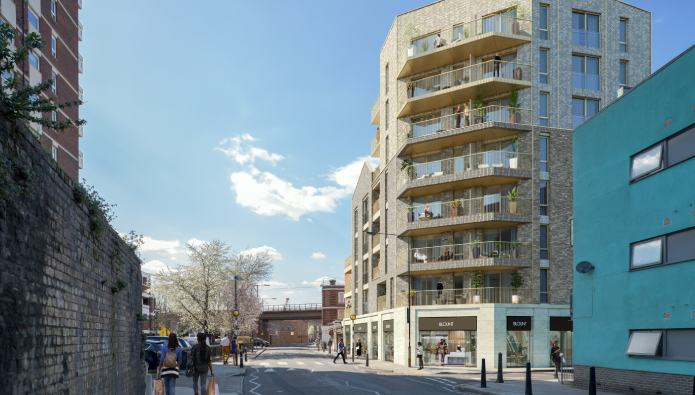 The developer has just exchanged contracts on the site and will now move to a full planning application, which is expected by the end of the year. If everything goes well, construction could start as early as the spring of next year.

The eight-storey building, which is being designed by On Architecture, will aim to provide Londoners on lower incomes with ‘a fantastic opportunity’ to live in a highly sought-after area.

The scheme sits only a five-minute walk from Limehouse Overground and DLR stations, and is also within walking distance of the financial district of Canary Wharf.

The local area has been popular with famous names throughout the centuries. Nearby is the 16th-century waterside pub, The Grapes, co-owned by Sir Ian McKellen and once frequented by Charles Dickens.

A few minutes away is Gordon Ramsay’s Thames-side gastropub, The Narrow, while the Rotherhithe and Blackwall tunnels provide easy access to the south of the river, including the Stave Hill Ecological Park.

“This is another great example of how we’re marrying high-end, design-led development with affordable housing, without compromising on quality,” Tom Slingsby, chief executive of Southern Grove, said.

“There is a chronic need for more affordable housing in London and this development will give dozens of families and young professionals the chance to live right at the heart of one of the most popular areas of the capital.”