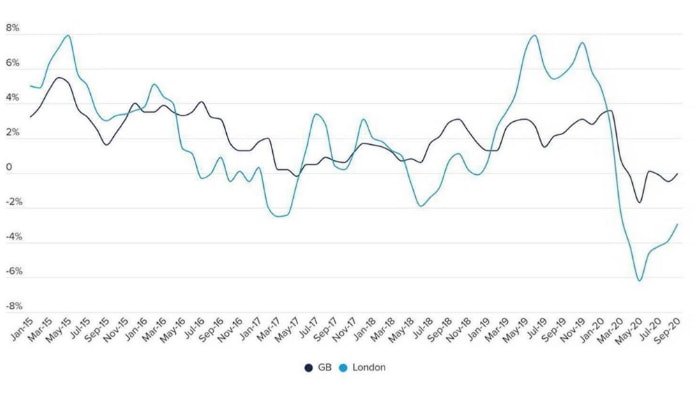 The number of homes let in opulent UK areas has recovered to a level which is above the same period last year, according to research by Hamptons International.

While the total number of homes let between May and September 2020 fell by 5.3% compared to the same period in 2019, the most affluent 10% of areas in Great Britain saw 1.3% more homes let.

The study shows the least wealthy areas of the country witnessed the largest drop in rental market history, down by 14.8% between May and September compared to the same period last year.

Similarly, the number of new instructions coming to the rental market in these areas was down 17.7% over the same period. Meanwhile, the 20% most deprived areas recorded an 11.3% fall in the number of homes let.

Head of research at Hamptons International Aneisha Beveridge comments: “Over the course of the pandemic tenants are more likely to have seen their incomes hit than homeowners. But the economic crisis has also widened divisions within the rental market.”

“While the top of the rental market has flourished over the summer months, the number of renters in the least affluent areas of the country moving home remains down on the same time last year.”

She adds: “Tenants living in the least affluent areas of the country are most likely to have been impacted by the economic crisis and this has made it harder for some renters to move home – typically at a time when they need to prove their income and pass referencing checks.

Beveridge says this will weigh down on the market’s revival as a whole, meaning despite strong year-on-year growth in the number of homes let between July and September, it is likely that fewer tenants will move in 2020 than in 2019.

Rental growth across the UK was flat in September, with average rents on newly let properties at the same level as they were in September 2019. However, the number of regions recording rent falls since the start of the pandemic has fallen to its lowest level.

Only London (-2.9%) and Wales (-0.1%) saw year-on-year declines in September. Rents in the South East and East of England returned to growth in the same month, having recorded falls in the previous quarter.

While the capital saw rents drop in every month between March and September, these falls have been predominantly driven by Inner London. However, September marked the first month since March when rents in Outer London rose 0.2% year-on-year.

“Rental growth remained strong across the Midlands and the North with no signs of a slowdown,” Beveridge adds. “Since March, London has been dragging down the national rental growth figure and continues to do so, but rent falls in London look to have bottomed out.”

“Despite this, London was the only region in England where fewer homes were let in September than at the same time last year.”

The chart below shows year-on-year rental growth in Great Britain and London: