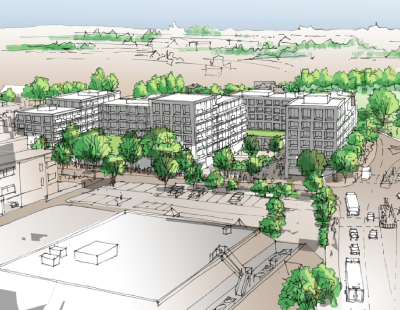 A retirement village expert has acquired a site in the heart of West Byfleet in Surrey, with plans for a ‘new sustainable, integrated development’ close to existing amenities and services within ‘the thriving community’.

Retirement Village Group (RGV) – which opened its first retirement village, believed to be the first anywhere in the UK, in Cranleigh in 1981 – has purchased the site for a £90 million ‘retirement-led mixed-use scheme’, which aims to provide 199 apartments.

These will include one to two-bed homes both for sale and rental, with top-class amenities including a wellness centre, and new public realm featuring an attractive pedestrianised square enclosed by retail, leisure and a new library and public car park.

Will Bax, who took over the reins as chief executive officer of RVG last year, having been at Grosvenor Estates before that, has made it his mission to reposition the business, with this £90 million purchase the first part of that process.

“This acquisition is focused on building on the success of our retirement villages and our heritage as one of the earliest promoters of retirement living in the UK,” he said. “This in-town format with a high level of amenities, integrates with existing services and maintains wider community links.”

James Ahearne, the development director who is leading the development, said: “The proposed scheme will deliver integrated place-making centred upon a new public square at the heart of West Byfleet.”

“A vastly improved commercial offer is proposed with a cluster of independent, convenience and leisure operators. This will generate both enhanced community value and deliver amenity to our residents.”

RVG acquired the site from Prime Finance (West Byfleet) SARL, who secured the outline planning consent. The two-acre island site is currently occupied by a vacant 1960s office building, a retail parade and a library. It has an outline consent for 255 apartments and new retail space.

Tom Scaife from Knight Frank and Bruno Jaczkowski from Montagu Evans, (who are also providing planning consultancy), acted for RVG. The lead architect for the scheme is PRP.

Since its very first village in 1981, RGV’s portfolio has evolved gradually to encompass 16 communities, equating to some 1,600 properties under management across the southern half of the UK.

Three years ago, the company was acquired by AXA Investment Managers – Real Assets, a global leader in real asset investments and a leading real estate portfolio and asset manager. AXA brought in Will Bax from Grosvenor Estates to accelerate the company’s growth.

It’s been suggested by some that retirement villages, as part of the growing retirement living sector, could be one solution post-pandemic in offering a more tailored, bespoke service to older residents – as well as building on the progress made in recent months in combating loneliness by ensuring this is sustained even once the crisis subsides.

However, the communal/community/social events element being offered by many retirement living providers as a key selling point could be more difficult in a world of social distancing and with a demographic that is particularly vulnerable to the worst effects of Covid-19.

In May, we asked whether coronavirus would derail investment in retirement living, which had been steadily growing before the pandemic hit. At the same time, major institutional investors such as Legal & General are taking an increasing interest in the retirement living sector as a viable asset class, seeking to replicate the success they’ve enjoyed in the Build to Rent and purpose-built student accommodation sectors.

Legal & General recently announced its first later living scheme in London, with schemes already underway in Epsom and Bath, one planned for Walton-on-Thames and further developments in the pipeline. It all forms part of the company’s £2 billion commitment to the retirement living sector.

← The Guild: Leicester lockdown a reminder not to be complacent Investors take financial hit as rent rises reach an all-time low →