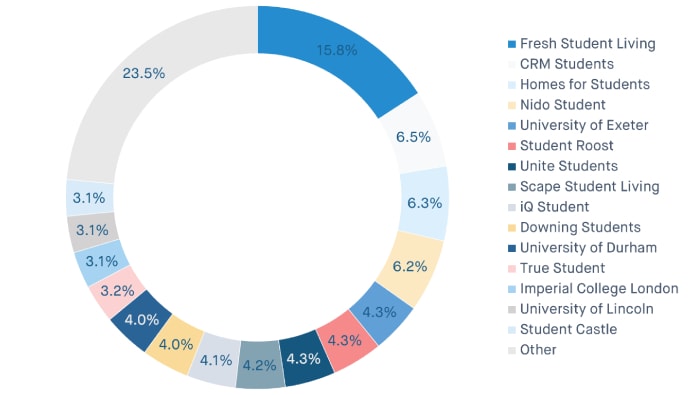 Unite – one of the largest providers of student beds in the UK – recently announced the successful completion of the placing it carried out, raising gross proceeds of around £300 million.

Placing Shares were issued at a price of 870 pence per share, with the placing price representing a discount of 3.1% to the middle market closing price on June 24 2020 of 897.5 pence.

Overall, the issued shares account for approximately 9.5% of Unite’s issued ordinary share capital prior to the placing.

Unite plans to use the equity raised to continue growing and investing in the business, committing to new schemes under offer and capitalising on new university partnership and development opportunities in key cities.

The firm has a secured development pipeline of 5,191 beds by 2024. The raise will be used to expand this pipeline with three additional sites under offer at a total development cost of £250 million.

The company believes that its early decision to forgo third term rents for students wishing to return home during the Covid-19 pandemic has enhanced its brand and corporate reputation, providing increased opportunities for new university partnerships with institutions who see Unite as a trusted partner.

Unite insists that it remains a financially strong business with a strong balance sheet, despite the challenges posed by coronavirus, and points to the growing visibility over its income for the 2020/21 academic year, which is ‘supported by an encouraging outlook for student demand for the 2021/22 academic year and beyond’.

As of 22 June, the company had £253 million of unrestricted cash with substantial covenant headroom.

Universities, which all closed their doors during lockdown, are set to be open for business this autumn, with a recent survey by Universities UK revealing that 97% of universities plan to provide in-person teaching in the autumn term of 2020/21.

Meanwhile, Unite’s own research found that 89% students want to return to campus as soon as it is safe to do so.

As such, the company believes there will be a strong return of international students in the 2021/2022 academic year, plus a return to demographic growth of the 18-year-old age group in the UK which will accelerate student demand.

Unite insists it is delivering a safe and secure living environment for its students. It is the first PBSA provider to be accredited by the British Safety Council as a Covid-assured employer.

The company also announced a trading update, which showed that reservations for the 2020/21 academic year, starting in September, was at 80% (down 8% from the start of the 2019/20 academic year). Half of these are underpinned by contracted nomination agreements.

It said that dividend payments are expected to be reinstated following the start of the 2020/21 academic year, while a total of 94% of rent had been collected under nomination or lease agreements for the summer term of 2019/20.

Unite said it expects a 15% fall in income for the 2019/20 year after forgoing rents for students that did not return for the summer term.

We recently covered a report from StuRents highlighting the continued growth of the PBSA sector, even in spite of the challenges currently posed. The data said the PBSA market could surpass 700,000 bed spaces for the first time if all the schemes currently in the pipeline come to fruition, with private operators controlling more than half of supply.

When analysing the new PBSA beds by operator for 2020/21, the StuRents figures showed that Unite will be the joint fourth biggest provider along with Student Roost and the University of Exeter, with 4.3% of the total new beds on offer.