Revealed – which UK areas are running the race in construction? 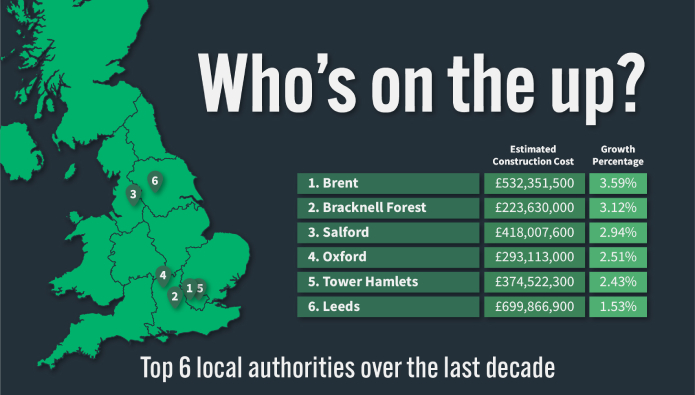 The figures represent a sharp incline of growth from the authority which has grown steadily since 2008.

Is Leeds the king of the North?

The data suggests that Leeds retains its place among the top five growing local authorities in the UK over the last decade. It’s also regularly considered as one of the best cities to live in when it comes to quality of life.

Looking back at 2008, Portsmouth was one of the biggest growth areas in the UK, spending far more than three of the current top five – Brent, Vale of White Horse, and Bracknell Forest – in that year.

For many years, though, Portsmouth has also been regarded as the most densely populated area in the UK.

The latest information shows that at 90,780, the city sits within the top 100 local authorities for current dwellings, a huge figure considering the city only has a total floor area of 11,191 m2 – the 12th lowest out of the 308 authorities included.

Portsmouth has spent approximately £519,989,283 on housing construction since 2008, showing that it is not afraid of putting its money where its mouth is when the opportunity arises to invest in new housing projects.

Commenting on the data, Craig Sanders, managing director at Protrade, says: “The Covid-19 pandemic has had a huge impact across a number of sectors, with construction also being hit hard during the first lockdown. However, it has bounced back from its contraction back in Spring 2020 and continues to be one of the main drivers for the recovery of the UK economy.”

“Despite difficulties the United Kingdom has faced, there has still been significant demand across the country for new builds, almost certainly helped by the cut of stamp duty. The ongoing lack of affordable housing has also fuelled the requirement for new homes.”

He concludes: “These numbers make for interesting reading and paints a clear picture of which areas are investing the most in house construction, and ultimately helping to tackle the ongoing UK housing crisis.”