Revealed – where are the best places to be an investor right now? 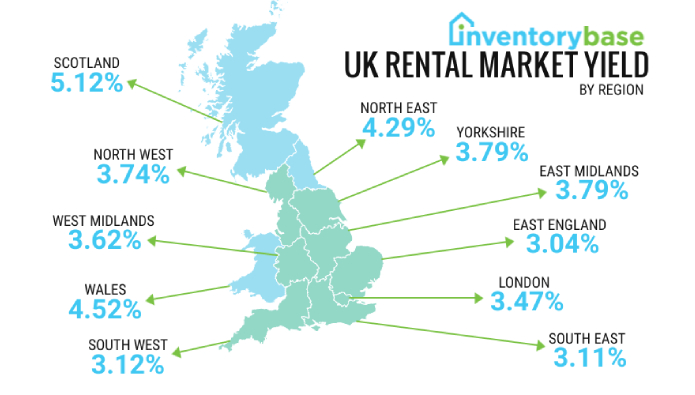 In every region, in fact, rental yields are down by as much as 0.41%, most likely as a result of ever-increasing house prices thanks to the stamp duty holiday fuelling demand and other economic influences.

Still, there are certain areas that have very strong yields, particularly in more affordable parts of the UK such as Scotland, the North East, Wales and the North West, where average prices tend to be cheaper and therefore initial buy-in costs are lower. This is an important factor when it comes to generating strong yields.

The survey also identified the cities across the UK with the best average yield for landlords, with four Scottish cities (Glasgow, Edinburgh, Aberdeen and Dundee) all featuring in the top 10, while popular cities in Northern England, such as Manchester, Salford and Leeds, all have yields higher than the national average of 4.12%.

All of these locations have large student populations and appeal, for one reason or another, to young professionals, whether for cultural reasons in Edinburgh, artistic reasons in Glasgow, media reasons in Salford, law reasons in Leeds or tech startup reasons in Manchester.

Edinburgh is, of course, famed (in normal times) for its yearly festivals, New Year Hogmanay celebrations and Burns Night, while Glasgow has reinvented itself in recent years as a music and art hub. Salford, a city which sits close by Manchester, has experienced a revival thanks to the arrival of MediaCityUK, as well as the appeal of The Lowry, while Leeds is a legal hub second only to London.

Meanwhile, Manchester has been seen as the poster child of the Northern Powerhouse regeneration project, and has been experiencing significant investment and renovation in recent years.

Warrick Swift, commercial director of InventoryBase, said: “This research confirms the national sentiment that northern cities are still some of the best for buy-to-let investment. With four of Scotland’s cities making the top 10, Scotland is bound to be a buy-to-let hotspot for the foreseeable future.”

He added: “Though rental yields have been declining, this hasn’t had much of an impact on the appetite for property. Thanks to the stamp duty holiday and other economic factors, people are still battling it out to buy additional properties despite diminishing returns.”

He argued that the likelihood of the conclusion of initiatives like the stamp duty holiday having a negative effect on buy-to-let landlords is low, but admitted it’s difficult to predict ‘what the future holds for those interested in getting involved in the buy-to-let industry in the coming months’.