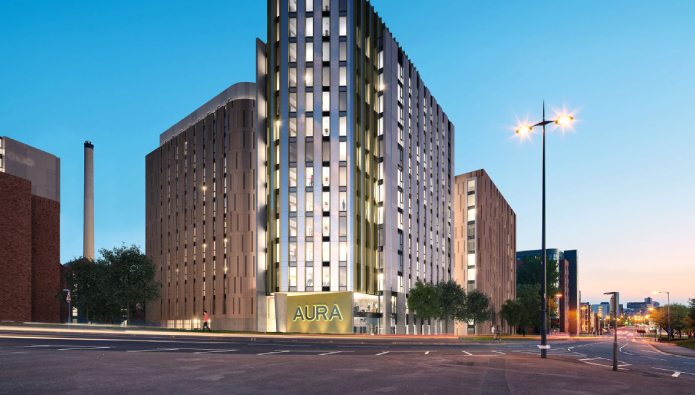 A property valuations and disposals firm has been appointed by the joint administrators of two further Elliot Group development schemes in Manchester and Liverpool.

Pantera Property has now completed a rescue deal to sell the stalled £100 million Aura student accommodation development in Liverpool for an undisclosed sum.

A consortium of the Aura project’s original investors will now restart work on the 1,000-bedroom development after receiving approval for the sale from the High Court last month.

In March this year, the Aura scheme, along with two further Elliot Group schemes, was placed in administration after allegations of fraud and corruption were made against the company’s founder, Elliot Lawless.

Harrogate-based Pantera Property is now working with Lambert Smith Hampton, on behalf of joint administrators from David Rubin and Partners, to sell the Elliot Group’s Infinity scheme in Liverpool and the Residence development in Greater Manchester.

In March 2018, construction began on the £250 million Infinity Project, with the scheme comprising three towers and 1,000 apartments close to Liverpool’s waterfront. Meanwhile, in Salford, the £70 million Residence project is a mixed-use development made up of one 15 storey and one 34-storey tower.

“It’s really good news that the sale of Aura to the scheme’s investors has now completed. It ensures both a positive outcome for creditors and the future of this student accommodation development in Liverpool’s Knowledge Quarter, which will doubtless be a considerable economic asset to the city once it is up and running,” Tom Snook, managing director of Pantera Property, commented.

“Infinity and the Residence are also great schemes in excellent North West city locations and, working closely with the joint administrators, investors and creditors we are confident of securing sales for both projects so that the build-outs are resumed and these two developments can reach completion.”

What are the claims against Elliot Lawless?

In December last year, Lawless – a high-profile developer in the Liverpool area – was arrested at the same time as Liverpool council officer Nick Kavanagh, where he was questioned on suspicion of conspiracy to defraud, bribery and corruption.

Kavanagh, who has since been suspended from his role as Liverpool Council’s director of housing and regeneration, was arrested on suspicion of conspiracy to defraud and misconduct in a public office.

According to the Liverpool Echo, neither man has been charged in connection with the investigation and Lawless denies wrongdoing.

A legal review carried out earlier this year revealed that warrants executed by police at properties linked to Mr Lawless were ‘unlawful’.

But the reputational damage associated with his arrest has led to investors pulling out of his developments – including the developments above and a hotel in Liverpool’s Baltic Quarter.

Lawless, who grew up in the city, has now told the Echo that building work at the hotel site has been put on hold as investors declined to continue to put more capital into the scheme until the police concluded their investigation.

The 33-year old was quoted as saying: “Unfortunately the effect of the unlawful warrants against me in 2019 are still causing my business issues. I continue to help Merseyside Police with their enquiries and although no charges have been brought against me, my investors on this project are reluctant to invest any additional capital until the investigation is concluded.”

During the corruption investigation, detectives seized £345,000 from Lawless, but the developer remains ‘very confident’ that the money will eventually be returned to him.

The cash was seized when officers searched property linked to Lawless in December, around the time he was arrested along with Kavanagh. They also searched two vehicles and recovered €10,442.10.

Lawless said back in January, a month after his arrest, that the money was from various cash businesses that he operates, as well as bank deposits. He insisted that all of it was receipted and properly accounted for. He said he had provided the necessary details to the police and fully expects the money to be returned in due course ‘once police finish their inquiries’.

At a court hearing in September, Merseyside Police was granted permission to hold onto the money for a further 90 days, the force’s third successful request for an extension since the money was confiscated.

The Elliot Group is said to have 20 development projects across the north – in Liverpool, Manchester, Leeds and Newcastle – with a gross development value (GDV) of £1 billion.

According to Companies House, the firm has had seven different names since being incorporated in October 2013. Lawless became the director of what was then known as Elliot Construction Ltd in October 2016.

← Investors: safeguard income with short, mid and long-term rentals A landlord’s market – 10% of landlords look to expand their portfolio →