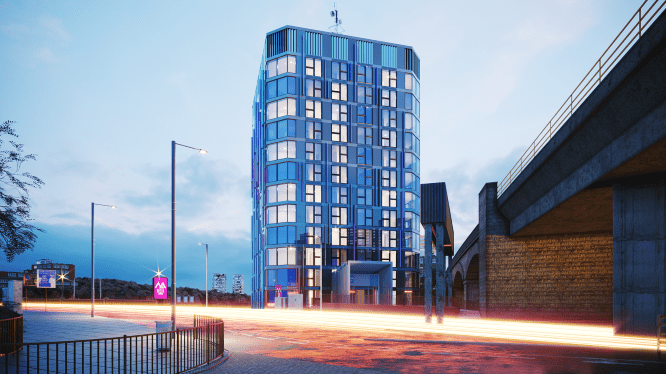 PRS developer Beech Holdings has purchased a landmark building in Newcastle with plans to refurbish it into 250 low-carbon, high-specification co-living apartments, its first development in its planned expansion across regional UK cities.

Cale Cross House (pictured), situated next to the Tyne Bridge, was built in the 1970s as commercial office space, but has since been unused for several years. Beech Holdings has purchased the site for £5.35m, and will invest a further sum of £18m into Newcastle.

The company plans to employ at least 15 permanent staff at the site, will contract hundreds of local tradespeople and use local suppliers during the construction period.

The site will be developed under permitted development rules, but Beech Holdings has been working closely with Newcastle City Council over the past few months and has now submitted planning to remove highly dangerous, combustible cladding from the façade and design an environmentally-sympathetic external finish.

The scheme will see 250 studio and one-bed apartments being created with co-living communal spaces on the lower-ground floors.

Stephen Beech, chief executive and founder of Beech Holdings, said: “We’ve been working on this deal for some time, it’s an exciting next step for Beech Holdings expanding into regional cities. This area of Newcastle City Centre has been somewhat overlooked in recent years, but this is where we excel, transforming unloved properties into modern, beautiful homes for residents.

“We want to invigorate and revive Newcastle’s community and business eco-system in the area, and that comes with an injection of people. We will offer a super-premium, but affordable choice of co-living in the city centre.”

Beech Holdings will retain its interest in this building once developed and is committed to supporting the city in creating homes for an undersupplied market.

Beech added: “My team and I are committed to Newcastle, we’ve felt warmly welcomed by the Authorities and community there. Our interest in Manchester will continue, but our model of creating low-carbon, tenant-focused, high-specification homes for young professionals, new graduates and students will offer Newcastle, and many more cities I’m sure, a much needed residential provision in a city centre that is desperately undersupplied.”

Beech Holdings is already complying with the yet unpassed Draft Building Safety Bill.

Beech Holdings has solely funded the purchase of Cale Cross House and has been advised by Sandra Manson senior director at Pegasus Group planning consultants. The development work will be carried out by the company’s design and build arm – Beech Design and Build. Construction is expected to start next month with an expectation to complete by September 2022.