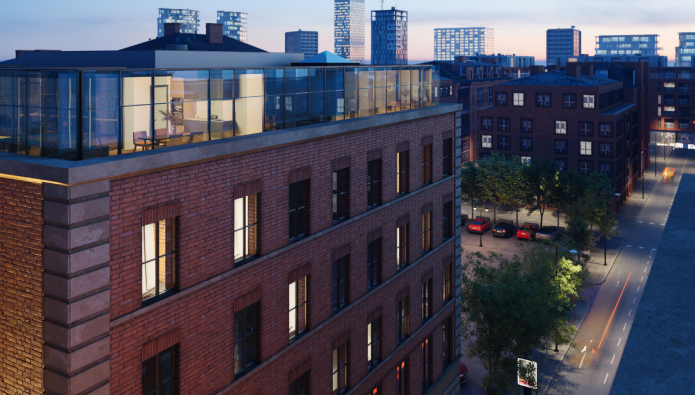 Beech Holdings was given the green light by Manchester City Council last week, with Paul Butler Associates acting as the planning consultant.

As part of the plans, the brick Victorian warehouse will undergo extensive regeneration of its 50,000 sq ft of space. It’s thought that Mindel House and Bloom Street are some of the last remaining unconverted Victorian warehouses in Manchester’s city centre.

The residential scheme, currently working under the title of Mindel + Bloom, will aim to maintain the industrious charm and several of the characterful features of the original buildings. This is a trademark of developer Beech Holdings, which places a key focus on lovingly restoring older buildings. It’s something the firm has already done with several other Victorian mills and warehouses within the city.

Maintaining these rare features also extends to the landscaping around the development, with a cobbled street – one of the defining features of the city, and best characterised in the long-running ITV soap Coronation Street – between the two buildings.

One side of Mindel House has been gifted to Manchester City Council for a community LGBTQ+ art mural, ‘breathing life into the area and welcoming visitors to Manchester’.

In recent years, areas of the city have been brought to life with colourful murals, with street artists paying homage to local, national and global heroes and events, instantly creating ‘world-famous works of art’ visited by thousands.

Once complete, the heritage renovation will consist of 80 low-carbon one and two-bedroom apartments – fully-furnished and hotel-like in their quality. They will include underfloor heating, Bosch appliances and bespoke bedrooms and kitchens.

Beech Holdings insists sustainability is a key consideration, with the developer always striving to create developments that work with the planet, not against it.

The development is sandwiched between Kampus – a new canal-side neighbourhood with around 450,000 sq ft of space, launched in spring 2020 – and Manchester Piccadilly train station, which offers fast links to the rest of the North West, the Midlands and London.

The current Mindel + Bloom site is also within walking distance of some of Manchester’s best restaurants, bars and shops, ‘making it a popular location for tenants wanting to benefit from Manchester city centre’s world-class amenities’.

Beech Holdings said of the scheme: “We are marrying Mindel House and 11 Bloom Street together, creating an exciting boutique residence in one of Manchester city centre’s best locations. We are perfectly placed to carry out this development as one of our key areas of expertise is transforming derelict, disused and unloved space into thriving locations for Manchester’s growing number of residents.”

It says it has greater control over projects due to involvement in every aspect of the development process, from acquisition, design and build, and project management, through to lettings and property management.