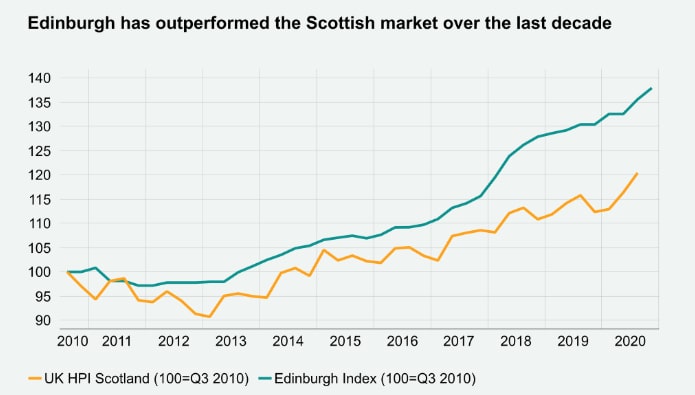 The housing market in Scotland is showing no signs of slowing down, with marked increases throughout Q4 2020 despite Covid setbacks, according to Knight Frank’s latest Edinburgh City and Prime Scottish indices.

Farmhouses were the top-performing property type in the fourth quarter in Scotland as buyers sought more space and a new work/life balance following a series of national lockdowns. Demand pushed values up by 0.3% in Q4 and 1.7% over the past year.

Scottish country house prices were flat overall in the fourth quarter, but annual growth of 0.8% was the strongest performance since June 2019. Much of the increase was fuelled by a busy third quarter after the market reopened in Scotland on 29 June.

Property valued under £500,000 also recorded an increase of 2% in Q4, taking the annual increase to 3.7% – the best-performing price segment within the Scottish country house market.

The relative affordability of Scotland – where the average house price was £163,248 in October compared with the UK average of £245,443 – meant many of the sales on the popular west coast of Scotland, were sold for £500,000 or less to a mixture of owner-occupiers and second-home purchasers.

Tom Stewart-Moore, head of Knight Frank’s rural business in Scotland, says: “We’ve seen some good deals this year and competitive interest at closing dates, which we haven’t seen for a few years.”

“Lots of people still want to move out of town, either from the cities of Scotland or England, and there are positive signs that we’ll have a good supply of properties to sell in 2021.”

Activity in the Scottish market surpassed the five-year average since its reopening. Offers accepted between 29 June and the end of November were up 44%, viewings were up 70%, new prospective buyers increased 53% and instructions rose by 19%.

Property values in Edinburgh increased by 1.7% in the three months to December. This marked the strongest fourth-quarter performance in over a decade and took the annual change to 5.8%.

Continuing the strong performance from the third quarter, properties valued over £2 million were the top performer in Q4, rising 5.6% to an annual growth of 14%.

Properties valued between £1.5 million and £2 million saw the second strongest rate of growth, with prices up 4.1% to reach 11.1% annually. This was due to a mix of wealthy buyers leaving London and domestic buyers upsizing.

“Houses have been the hot ticket with buyers from London, as well as local residents looking to upsize, which has driven the prime market,” says Edward Douglas-Home, head of Scotland residential at Knight Frank.

The number of new prospective buyers registering in October and November were the fifth and sixth highest monthly totals on record, underlying the strength of demand.

The prime suburban market – comprising Victorian-era homes outside the city – benefitted from people’s pursuit of spacious homes since lockdown ended in Scotland.

Average values in the residential south Edinburgh, including the areas of Morningside and Merchiston, rose 2.3% in the three months to December, taking annual price growth to 7.1% – the best-performing area of the city.

Prices in Edinburgh have increased by 33% in the past 10 years, making it the fastest-growing area in Scotland, according to the National Records of Scotland.

Scotland has a transaction tax holiday in place, with the Land and Buildings Transaction Tax suspended on the first £250,000 of a property purchase until March 31 2021, which Knight Frank says should support activity in 2021.

← Q&A - why will Birmingham continue to attract investment in 2021? Countdown - Brits have 6 months to secure EU residency with PT Golden Visa →