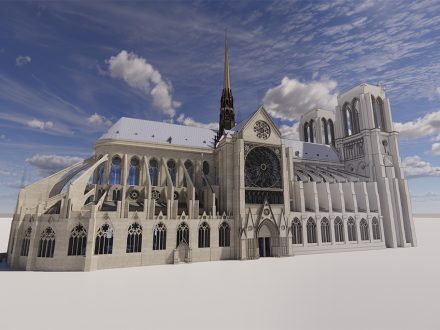 A full 3D model of Notre-Dame Cathedral in Paris has been unveiled to help restore the historic building that was badly damaged by a 2019 blaze.

US software firm Autodesk, which was first announced as a partner on the project in June 2019, created the model by comparing laser scans of the structure taken pre-fire and comparing them with scans after the fire. These have been combined to create a 3D BIM model of the 12th-century building.

The French Government’s special representative on the project, Jean-Louis Georgelin, said: “Thanks to Autodesk’s patronage, the use of cutting-edge design, construction technologies and BIM are being leveraged to help prepare for the reopening of the cathedral, and to once again welcome both pilgrims and visitors.”

The fire, which struck as the structure was undergoing maintenance works in April 2019, caused major damage to much of the iconic cathedral’s roof and spire.

Autodesk vice president of business strategy for architecture, engineering and construction design solutions Nicolas Mangon, said: “Since the devastating fire two years ago, we have provided funding and technology to support the effort through the French fondation du patrimoine (Heritage Foundation) and this announcement reinforces our commitment.”

The French ministry of culture received a draft report on the disaster from the Court of Audit in October, which made a number of recommendations. In response, the ministry announced a safety audit of all cathedrals in France, and pledged to invest more than €160m (£140m) in cathedral restoration over the next two years.