New £250m tower approved in the City of London 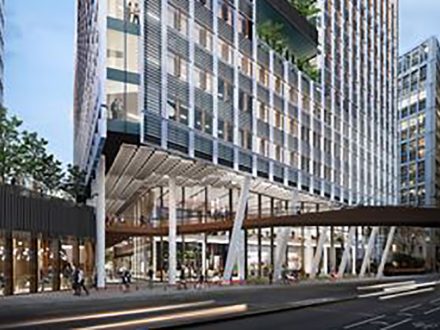 Developer Great Portland Estates (GPE) has got the go-ahead for a new £250m, 13-storey office block in the City of London.

GPE said it hopes to start building work in early 2022, after the City of London Corporation green-lit the development plans. The £250m is the overall development value of the scheme. A spokesperson for GPE declined to confirm whether a contractor had been appointed or if procurement had begun.

GPE development director Andrew White said the building will deliver “the highest standards of sustainability together with expanded public realm and amenity”. The development will include 831 long-stay and 88 short-stay cycle parks, alongside a green roof and planted terraces for each flat. The developer will use an offsite consolidation centre to distribute materials, reducing the number of daily deliveries to site. It claimed the approach would remove up to 30 vehicle journeys every day.

GPE said in January that its expansion plans in London amounted to more than 1.3 million square feet of office space in the medium term.

← The 5 Most Common Home Improvements Projects Guest Blog: Is it Better to a Have a Pension or Buy a Property? →