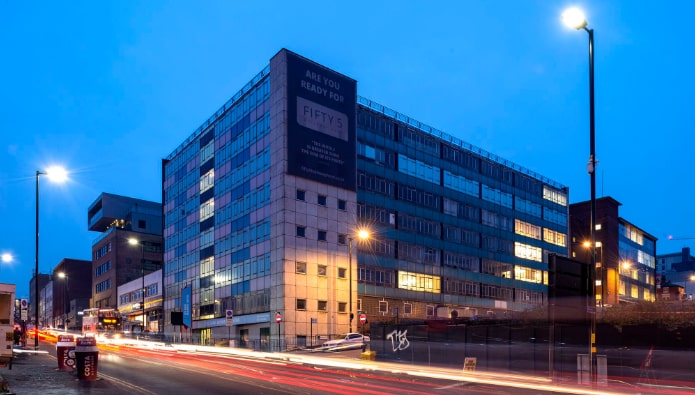 Claremont Property Group has been granted approval for the regeneration of 55 Holloway Head, with the historic ‘flatted factory’ in Birmingham set to be transformed into more than 130 new homes as part of an ambitious multi-million-pound regeneration scheme.

The property developer and investor will retain the existing seven-storey structure and add an additional five storeys to the Holloway Head side of the building and two on the Blucher Street end.

The development, going under the working title of ‘Projekt 55’, is set to create 122 apartments, including 47 one-bed, 65 two-bed and 10 three-bed units, providing large open-plan ‘habitable spaces that exceed minimum local and national space standards’.

Additionally, a further nine new townhouses with accompanying roof gardens will be developed on Chapmans Passage, with additional space for an office and a restaurant.

The scheme has been designed by K4 architects and reuses substantive elements of the existing structure, including the main staircases and lift shafts. The scheme includes a range of shared amenity spaces, with a roof garden and larger than normal circulation spaces to encourage social interaction between residents.

Meanwhile, the redeveloped exterior will aim to create the appearance of a new building, with enhanced facades.

“We are hugely excited to have received approval to transform 55 Holloway Head. We have dedicated more than two years in carefully planning this development, so it is very pleasing that our proposals were so well received by Birmingham City Council,” Andy Robinson, business development director at Claremont Property Group, said.

“We’re looking forward to maximising the potential of the building’s structural strength to deliver Birmingham’s first five-storey roof extension and a brand-new facade that will make a marked improvement to the street scene.”

He added: “The pandemic has reshaped our lives and as we enter another period of lockdown with ongoing social distancing, the unique configuration of this building becomes even more relevant.”

He says the configuration will allow Claremont to deliver much larger capacity apartments than neighbouring sites, with ‘unusually wide’ corridors and private and communal outdoor spaces that are ‘atypical’ of other prime city-centre locations.

“It’s a fabulous opportunity to rejuvenate a historic building and facilitate a very modern way of living and working from home,” he concluded.

What was the building’s former purpose?

According to Claremont, 55 Holloway Head has a rich history synonymous with the ‘city of a thousand trades’.

Built by Birmingham City Council in the late 1950s, the former ‘flatted factory’ – as it became known – was designed to accommodate small industrial units displaced by residential schemes in the city centre.

As such, the building contains corridors and lifts that were designed to accommodate forklift trucks and also includes large floor plates with a depth of 21 metres. It was one of just three of its kind to be constructed in Birmingham.

The building’s location is one of its main draws, close by to transport links, ‘major and secondary convenience retail, and leisure and employment centres. It sits to the west of Birmingham’s Chinatown and the Gay Village, is five minutes’ walk from The Mailbox and ten minutes from the Metro, New Street Station, Grand Central and the Bullring.

Claremont Property Group has recently established a reputation for breathing new life into historic buildings, with the property investor and developer last year completing the conversion of a Grade II-listed Edwardian library in Stourbridge.

It is currently also assisting Birmingham City Council by temporarily converting one of its buildings in the city’s Jewellery Quarter into temporary accommodation for vulnerable adults and hospital releases during the pandemic.

The above feeds into the wider trend for residential conversions as a reaction to the pandemic, as alternative uses are sought for perfectly good buildings which no longer serve their previous purpose.