Investors – should you buy early at regeneration schemes? 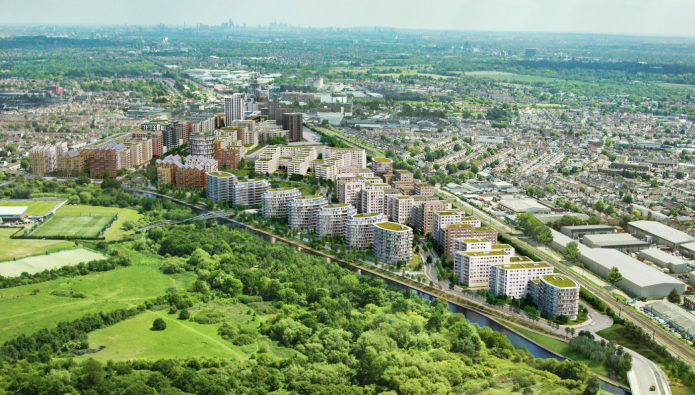 Situated next to the Grand Union Canal and close to Southall’s upcoming Crossrail station, the scheme is within easy reach of both Heathrow and Central London. Southall town centre, meanwhile, is one of the most diverse and characterful in the whole of London – often known as Little India, it has been a South Asian hub since the 1950s and featured heavily in the 2002 hit film Bend it Like Beckham.

It’s well-known for its local market and its eateries offering traditional Indian produce such as samosas, dosas and jelabis, as well as for one of the largest Sikh temples outside of India, the spectacular Gurdwara Sri Guru Singh Sabha.

Here, we chat with Charlie Joseph, sales and marketing director for Berkeley (West Thames), about green spaces, buying early, the Crossrail boom and the importance of sustainable construction.

Why is buying early at regeneration schemes a good idea for investors?

Those who buy early into regeneration schemes aren’t just investing in a home, but in the transformation of the place and connections it makes within other, more established areas. At The Green Quarter, we will create links between Southall and Hayes and open up access to the 90-acre Minet Country Park – in addition to the new green spaces being produced as part of the development.

In our experience, although communities tend to emerge as soon as residents move in – building on existing networks and facilities in the local area – the development is still evolving, and some aspects are not yet fully established.

For instance, when more amenities open, it helps to create a buzz around a place and establish it as an area in which people want to live, visit and spend time. Investing early on in a development’s lifecycle provides investors with a great opportunity to benefit from that evolution before the development becomes more established.

Do you think green space, nature and a sense of community have become more important to investors since the start of the pandemic?

Yes, I think it’s clear that the past year has seen a change in buyers’ priorities. I read in a survey by Savills (published in autumn 2020) that 62% of people value outdoor space more than before the pandemic, though proximity to green areas has always been a key consideration for people.

It is certainly true that in recent years, there has been a greater focus on how green spaces and nature can be designed into developments – in more significant ways than a few trees here and there – to improve people’s wellbeing and encourage strong, integrated communities to form. 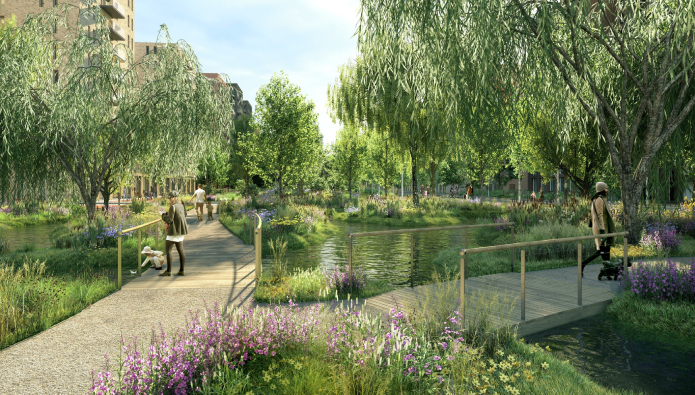 Even so, whether buying in 2001, 2021 or 2041, there are aspects that investors and homeowners will always look for. Top of that list is quality, and we pride ourselves on that being our number one priority when building homes.

Can you tell us a bit more about The Green Quarter? Whereabouts is it in West London?

The Green Quarter is one of London’s most ambitious regeneration schemes. It is a new 3,750-home development in the London Borough of Ealing, set within extensive green space but within easy reach of Central London.

When we first started work on the scheme, it was a redundant industrial site and car park, but we are transforming it into one of the UK’s most biodiverse developments, with two new parks and a wetlands alongside new homes and a commercial quarter with shops, cafés, amenities and a new town square.

It’s right next to the 90-acre Minet Country Park, which we are opening up access to with new footbridges over the Grand Union Canal, and opposite Southall Station, soon to be home to Crossrail.

For an idea of its potential, look at Berkeley developments of a similar scale, including Royal Arsenal Riverside and Kidbrooke Village, which have seen capital appreciation of up to 100% over 10 years.

When will the development complete and will all the homes be for sale? Will there be an affordable housing element, too?

Work commenced on the development in early 2016 and the scheme will be delivered in phases over the next 25 years. We’ve been blown away by the interest from homebuyers – both investors and owner occupiers – since we launched a few months ago and have sold 70% of homes in Phase 1. 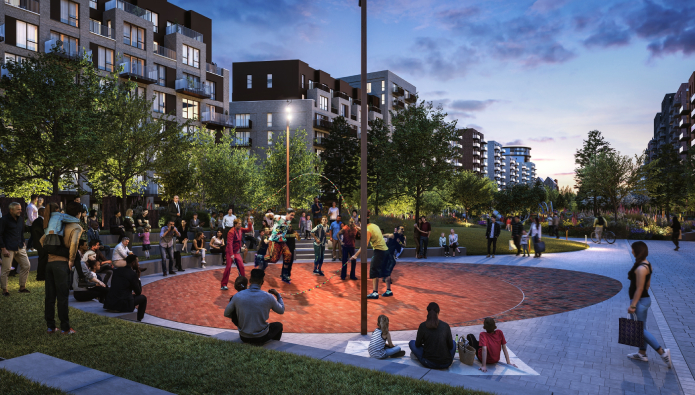 These homes are now ready to move into and we’ll soon be launching the next phase of new homes which will be available off-plan. Our construction teams are hard at work to get the next phase out of the ground to keep up with demand!

The Green Quarter is also providing a large number of affordable homes. In Phase 1, almost half of the homes were affordable and offered to existing Ealing residents under either affordable rent or shared ownership, and we’ll continue to provide more affordable housing as the scheme progresses.

Have prices in Southall experienced a Crossrail boom already, even though the transport scheme has been heavily delayed?

We’re very excited by the new Crossrail station – and clearly so are our buyers. Being right next to the station is a massive selling point for us and our sales team have told me it is often cited as a key reason for investing in the area.

In fact, analysis from Hamptons International shows that property prices within a mile of Crossrail stations have already increased by 66% and are continuing to rise, so it’s a great time to invest before the line opens next year.

We’re creating a new entrance to the station from the development so it’s literally right on our residents’ doorstep. It’ll mean people can travel to Bond Street in 17 minutes, Liverpool Street in 24 minutes and Canary Wharf in 31 minutes. 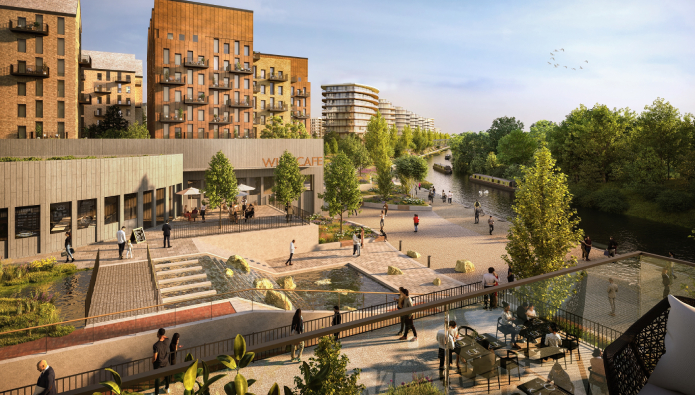 Why are new-builds a good idea for those looking for a lifestyle investment, post-Covid?

When you purchase a new-build in a large regeneration scheme, you’re buying into a place as well as a home – I know it sounds like a cliché, but it’s true!

The pandemic has made us all focus more on the immediate area around where we live and what there is to do within walking distance from our homes – from green space to gyms and swimming pools, first-class restaurants to roof terraces, the range of amenities that allow you to lead the life you want.

That’s what we have in mind as we plan our new residents’ facilities at The Green Quarter, which include a coffee bar, co-working space, gym and swimming pool, while residents will also have access to a concierge.

Both investors and owner occupiers want to invest in a lifestyle, which means it’s important to think carefully about what there is for residents on the site – something which Covid has certainly accentuated.

With sustainability a key issue for many investors right now, why should new builds be seen as being at the vanguard of this movement? From the name, The Green Quarter suggests a development heavily focused on nature – is this the case?

Sustainability and energy efficiency are central to the way we design our homes. This means they’re better insulated, save energy, and include the latest technology, such as smart heating systems.

The fixtures and fittings reflect this as well – at The Green Quarter, our toilets are all dual flush and our homes feature integrated recycling bins hidden from view. If designed the right way, these new places will encourage sustainable living – for instance through scenic paths for walking, running or cycling – and support nature recovery, especially on sites that were previously industrial land.

We chose The Green Quarter’s name because of its close relationship to nature. It’s situated next to the Grand Union Canal, and, once completed, close to two-thirds of the homes will overlook water or green areas.

According to research from experts such as BlueHealth, access to these spaces is proven to have a positive impact on wellbeing.  In fact, 2019 data from the Office for National Statistics shows that having views of open greenery or stretches of water boosts house prices by 1.8% and this has only been increasing as a priority since then.

The completed development will include two new parks and a wetlands, which we’re delivering in partnership with biodiversity experts the London Wildlife Trust to help us create habitats to attract new wildlife and plant-life.

We’ve also reinstated 1.2km of the canal’s towpath, which is now a wonderful route – take my word for it!

How important are sustainable methods of construction, given the amount that this sector contributes to emissions each year?

It’s vital that the sector continues to incorporate modern forms of housebuilding. Having been involved in development for over a decade now, I know that construction methods are being advanced all the time – anything from digitising design plans to recycling building materials for pathways.

However, it’s vital that we don’t get set in our ways and we should be driving innovative, sustainable technology and techniques by setting ambitious environmental goals, including around biodiversity and carbon emissions. 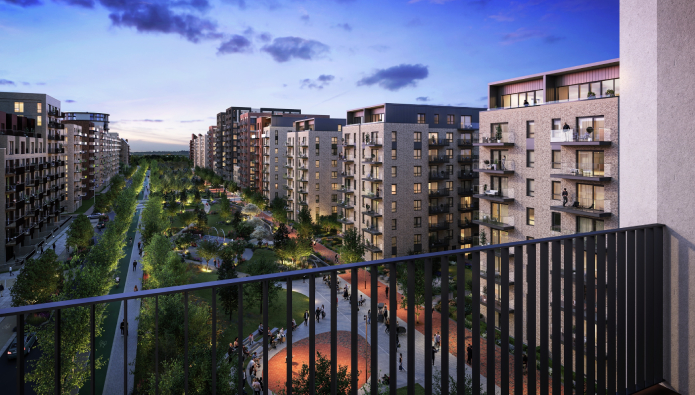 Sustainability is central to the vision of the wider Berkeley Group, which has recently published its pathway to be a net zero carbon business by 2040.  Similarly at The Green Quarter, it’s a major focus in everything we do.

We’re looking at how we can use modern methods of construction to be more efficient, designing greenery into our homes through green roofs, creating temporary habitats for wildlife in areas of the site yet to be developed and encouraging people to cycle and use public transport.

When building new places, you need to ask yourself ‘is this as sustainable as it can be?’, and that’s not restricted to construction – it needs to be central to everything.

Should more former industrial sites be transformed to help ease the housing shortage? What are some of the challenges faced when getting these sites ready for development?

Redundant, brownfield areas should not be sitting empty, especially during a housing crisis, so it’s vital we transform them even if this is more complicated and does require a larger initial investment. If the land does need to be cleaned up, that should be done carefully and thoroughly.

Before we started work at The Green Quarter, it was an 88-acre industrial site that was barely used other than as a car park. Now the space will not only help with the housing shortage and create a fantastic place to live and visit, but with the UK’s drive for nature recovery as we create habitats for animals, insects, and plant-life to thrive.

Lastly, what are your expectations for the West London property market – both for buyers and renters – as lockdown starts to ease?

By just walking through different areas in West London, it’s clear that it’s one of London’s fastest-growing areas. There’s a lot of exciting investment and it’s quickly becoming a major destination for visitors, with new green spaces plus world-class retail facilities such as those in White City, complementing an area that already has a fantastic cultural offering.

This is reflected in growth projections. JLL predicts prices will rise by 19% over the next five years and we’re expecting Crossrail to further strengthen this.  Evidence from the first phase of our new homes shows rental yields are already very strong, so it’s a great time to buy and capitalise on the investment in the area.

West London also has a lot going for it in terms of education – which is a big draw for many – boasting several major universities such as Brunel, Royal Holloway and Imperial College London.  Actually, some of our first buyers at The Green Quarter have been professors and we’re expecting to see a steady stream of renters as well.

On top of this, West London includes plenty of employment opportunities for people, with several business parks and Heathrow Airport.