Investors – is housing the future of the high street? 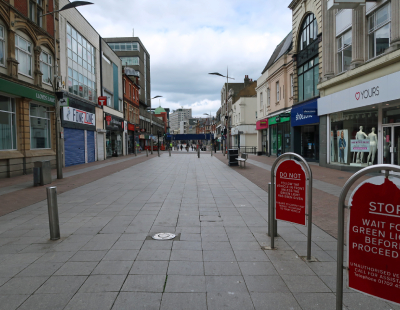 On PIT, we’ve asked this question quite a lot in recent months, with John Lewis entering the Build to Rent market earlier this year and other examples of commercial to residential conversions as the pandemic has bitten the high street harder than any other sector.

It was already on the decline before Covid, but the pandemic has supercharged and shone a harsh light on its existential troubles, with the news last week that Philip Green’s Arcadia Group had collapsed into administration – and retail titan Debenhams had gone to the wall, too – the latest sign that alternative uses are going to need to be sought for high street premises.

Last Thursday, the government launched a surprise consultation on its latest shake-up of the general permitted development order, with a proposal from the Ministry of Housing, Communities and Local Government (MHCLG) for a new permitted right to allow buildings to change use from Class E to Residential.

Here, with the expert help of Nicola Gooch, planning partner at Sheffield law firm Irwin Mitchell, we take a closer look at what this could mean for the transformation of the high street.

What happens if the Class E to Residential right is introduced?

“If this comes into effect, it would significantly broaden the scope of the existing residential conversion rights – as it would not only apply to offices, light industrial and retail, but also to restaurants, gyms, medical facilities and crèches,” Gooch says.

“The new right is intended to apply to ALL Class E buildings, regardless of the size of the property in question. It is also intended to apply in Conservation Areas. The only proposed geographic carve-outs are: Areas of Outstanding Natural Beauty, the Broads, National Parks, areas specified by the Secretary of State for the purposes of section 41(3) of the Wildlife and Countryside Act 1981, and World Heritage Sites.”

Gooch believes the new Class E to Residential permitted development right is the biggest and ‘potentially most radical’ of the changes proposed by MHCLG.

“Not least because, despite the entire justification for it being related to high streets, the rights are not limited to high street properties. They will, in fact, apply to every GP’s surgery, retail park, business park, gym, crèche, nursery or light industrial unit in England that existed and was in use on September 1 2020.”

She continues: “There is a nod to preserving high streets in conservation areas, but it does seem to be just that – a nod. The intention is to include specific prior approval criteria allowing councils to consider the ‘impact of the loss of the ground floor use to residential’ in conservation areas.”

The proposed list of matters to be subject to the prior approval process is remarkably short, Gooch says.

Currently, the only things being proposed are Prior Approvals relating to:

Gooch explains that the application process is intended to be similarly light touch, with the list of required documents being limited to: detailed floorplans showing dimensions and proposed use of each room, including the position of windows; any information necessary for the consideration of the matters for prior approval, and an appropriate fee.

While there are many other changes proposed in the consultation, including new PD rights for public sector and infrastructure schemes, a new streamlined application process for public sector developments and a consolidated and simplified GDPO that takes into account the creation of Use Class E, Gooch believes the new Class E to Residential right is comfortably the biggest and potentially most transformative of the planned changes set out.

“Given the impact that Covid 19, and the associated restrictions, have had on the economy, there will be a real temptation for commercial landlords to flip vacant units to residential before looking at other, more traditional, commercial uses for them,” she says.

“If this is enacted, unless councils are very quick off the mark with their Article 4 Directions, the future of many high streets may very quickly become predominantly residential.”

With the news of the collapse of the Arcadia Group, Debenhams and Bonmarche hitting the headlines in recent days, it’s perhaps little surprise that 61% of Brits are worried that the high street as we know it is at risk of disappearing entirely, with store closures permanently changing the retail landscape.

That’s according to research from KIS Finance, which surveyed 1,000 consumers in the UK to understand the future for our town and city centres.

As well as concerns over the high street’s very existence, those polled believe fashion, food, beverage and value brands will be the biggest victims of the high street due to online competition. It found that convenience is a key factor that affects our shopping habits, with online shopping often winning out on this metric.

As stated above, the high street has been in decline for many years, but the pandemic has simply accelerated an existing problem at an alarming rate. Research by The Local Data Company and PwC found that more than 11,000 outlets shut in the first half of 2020, double the amount for the same time last year.

High streets may become central to the community again

Holly Andrews, managing director at KIS Finance, says as many large retail outlets close, we may see a continuation of the pattern over recent years of vacant properties switching to residential use.

“Certainly, there has been an increase in applications for bridging loans for those wanting to convert shops and offices into residential units,” Andrews adds. “With the changes to the UK planning system proposed by the government, the process of converting empty retail space into much-needed housing could be one way to bring people back into central locations.”

She concludes: “For this transition to work high streets need to find ways to reinvent themselves to remain a relevant space at the heart of our communities.”

What is the future of cities?

With the above in mind, will even mega-cities like London – for so long a global melting pot of ideas, culture, commerce and business opportunity – struggle post-pandemic?

According to Simon Barry, head of new developments at Harrods Estates, cities which attract the growth industries of the future and provide an attractive working and living environment will do well even as the challenges of the high street persist and many people continue to work from home.

“We think London will continue to be one of the most desirable cities in which to live and work,” he adds. “London has more green space than most cities of a comparable size, is relatively ‘low rise’ and low density whilst retaining a residential core in and around its centre. Its office and tech infrastructure built up over the past decades provides the capacity for global business and financial services to function which other European cities at the moment cannot match.”

He believes the devastation of the high street over the past year and the car-free cities of the future are likely to have unintended consequences. “I predict it will lead to more localism and locations that are pedestrian-friendly, with a critical mass of retail stores and leisure amenities within walking distance. London’s historic villages will become even more desirable and are likely to be the big winners.”

He adds: “However, as many of us come to realise the true value of offices, the potential for collaboration, the energy of teams, announcing the demise of commuting and city living looks a little premature.”

David Ruddock, partner and head of residential sales operations at well-known estate agency Carter Jonas, believes the long-term impact of Covid-19 on city living is still largely unclear. “But what we do know from our central London agents and teams operating out of locations such as Bath, Cambridge and York – is that there is a desire for community and connectivity. Lockdown has for many reinvigorated urban community life and a sense of loyalty towards the businesses, independent retailers and people that contribute to an area – be that in rural villages outside of major cities or within high density London boroughs.”

He adds: “It is well-documented that there has been a surge of people moving to the countryside, but equally there are those who enjoy being within walking distance from – when they open – the arts, theatre and social scene of a city centre and there is clear health and lifestyle benefits of not needing a car to get about.”

“There is no doubt that across the UK there will be breakout ‘boutique villages’ emerging within major cities, and in London, desirable areas such as Marylebone, Notting Hill and Barnes will continue to thrive as cultural bubbles.”

← Property market predictions for 2021 – what can we expect? Council’s huge fine on owner after refusing planning consent →