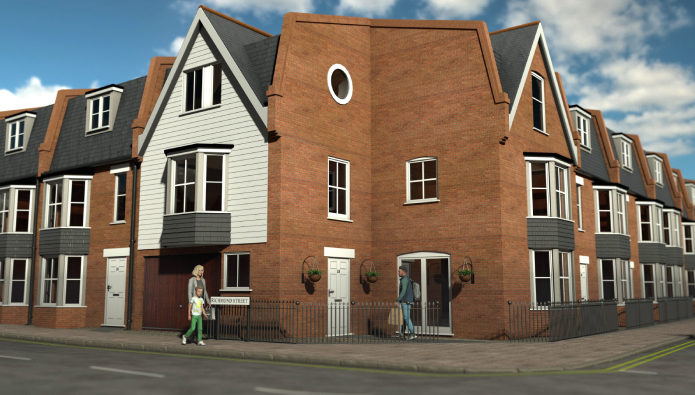 In contrast, the highest number of sites available for self-builders are in the Highlands and Grampian areas of Scotland, Northern Ireland and the South West, but these areas attract a relatively smaller number of applications.”

Last year, the government announced a review of self-build housing, including re-evaluating the effectiveness of the ‘Self-build and Custom Housebuilding Act 2015’, to make it easier for people to build and commission their own homes by encouraging councils to grant planning permissions for projects.

This involved £2.2 billion of new loan finance to support housebuilders, including delivering a new Help to Build scheme for custom and self-builders, as well as funding for SME housebuilders and Modern Methods of Construction (MMC).

In addition, there is £100 million of funding to support, among other things, the release of public sector land, including serviced plots for self and custom builders.

A key factor which can affect not only the value of self-builds but also the types of construction and finishing material used is confidence. While some potential self-builders may opt to defer projects until economic times are more certain, post-Covid, the ‘self-funded self-builder’ is more than likely to continue with plans for their project regardless of the current economic uncertainty.

Across the UK, residential land values vary significantly and have become increasingly polarised between the very high levels in the South East and the rest of the UK.

For the most part, variation in land costs is related to the availability of self-build plots within key areas, the research found.

In the next few years to 2024, AMA Research believes the growth of this market will be greatly affected by how long the Covid-19 pandemic lasts and how quickly the economy, and the construction industry in particular, recovers.

While the government has recently announced additional support for self-build, the issue of appropriate and sufficient finance remains a key factor determining the future value of the market, the company concludes.

An established, active developer and construction company has appointed one of East Kent’s leading estate agencies to market its latest boutique project, Bay Square in the heart of Herne Bay.

Guildmore has instructed Miles & Barr to sell the homes in the centre of one of the Kent coast’s most vibrant seaside towns. The development in the resort which has been popular since Victorian times will transform the town’s former bus depot to create ‘21 beautiful homes and 29 stylish apartments’.

Buyers and investors can now register their interest with Miles & Barr to explore purchasing one of Bay Square’s first eight properties, including two-bed apartments, priced from £230,000, and three-bed cottages priced from £345,000. Help to Buy will be on offer to those buyers looking to take their first step on the housing ladder.

Rob Sabin, sales managing director at Miles & Barr, commented: “The completion of Bay Square will form a key part of Herne Bay’s rejuvenation. From first-time buyers to those downsizing or upsizing, they will have the opportunity to purchase affordable housing at the centre of the local community.”

He added: “The commercial premises will also provide businesses with the chance to generate additional local jobs opportunities, bringing life back to our quieter than normal high streets. Guildmore is an established developer with strong credentials and we are delighted to market Bay Square on their behalf. Our Land & New Homes team will be working in unison with our Herne Bay branch to raise the profile of this much-loved seaside town.”

Steve Jelley, managing director at Guildmore, also said: “Miles & Barr has an enviable reputation in East Kent and their performance to deliver results is proven. We are excited to work with them to market our latest development, Bay Square, which will create an inclusive and accessible community as part of the regeneration of Herne Bay’s High Street.”

The latest major apartment scheme in Birmingham from Elevate Property Group has now been completed, with 90% of the properties having already been sold off-plan upon release of the site last year.

The 52-apartment complex in Cliveland Street is still offering five stylish one and two-bedroom apartments which have been held back and only just released for sale in this brand-new canalside development in Birmingham’s famous Gun Quarter.

These are being offered exclusively on a part-buy, part-rent basis, to try and enable first-time buyers to get a foot on the housing ladder. A one-bedroom duplex show home opens this weekend (13-14 March) for viewing. 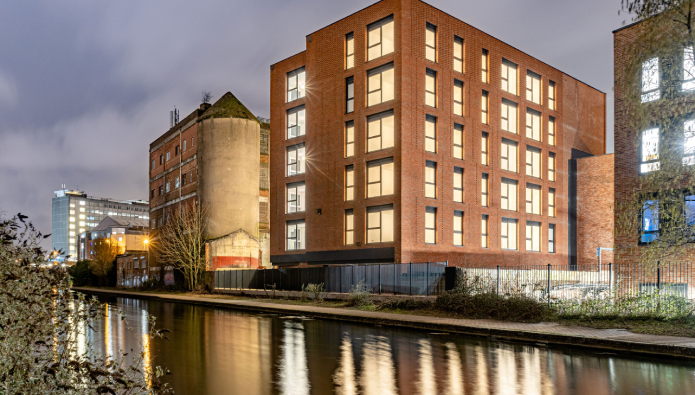 In total, the Cliveland Street development includes 30 two-bedroom and 22 one-bedroom apartments and is the seventh scheme to be completed by Elevate in Birmingham.

According to Steve Dodd, managing director of Elevate Property Group, Cliveland Street sits in the centre of an area that has undergone a dramatic transformation in recent years.

It is situated next to London and UK Property’s Globe Works student scheme of 520 units and opposite Snow Hill Wharf, which has been developed by Berkeley Homes on the other side of the canal. 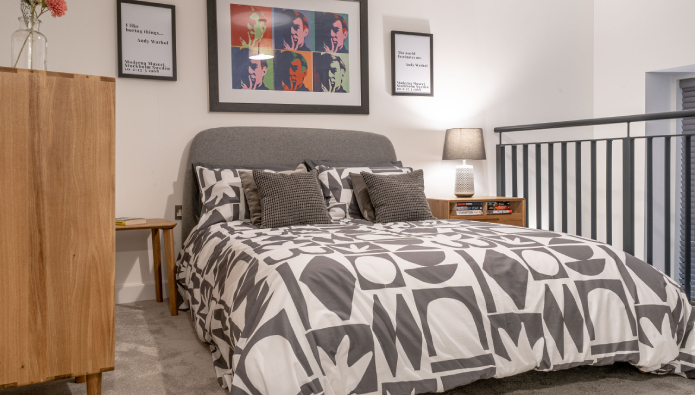 David Hofton, Elevate’s sales and marketing director, said of the scheme: “This previously underdeveloped area of the city in such close proximity to Snow Hill and the Jewellery Quarter has been transformed by these developments and we are delighted to have contributed to the renaissance of Cliveland Street.”

He added: “The remaining five apartments have prices starting from just £105,000 for a 50% share and are beautifully appointed with German kitchens having integral appliances and Hansgrohe & Duravit bathrooms with Porcelanosa tiles to bathroom walls and floors.”

The homes also include a gated entrance, car parking, bike storage and a courtyard patio with planting and views of the canal. 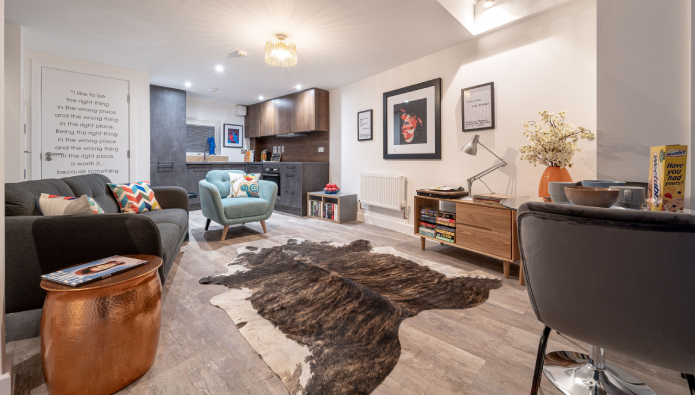 Elevate says it currently has nationwide interests in 1,300 plots with a gross development value of more than £330 million.

Sticking with the Second City and news that Housing Secretary Robert Jenrick has approved Eutopia Homes’ plans to deliver 480 homes alongside a brand-new hotel and commercial space in Birmingham city centre.

Designed by award-winning architects Darling Associates, the £130 million scheme is formed of seven blocks ranging from three to 26 storeys in height, joined together by walkways and landscaped public realm.

The tallest tower will play host to 180 apartments, sitting alongside a further 300 rental homes including 12 four-bedroom townhouses.

As well as the new housing, there will be an eight-storey, 167-bed hotel and nearly 16,000 sq ft of ‘affordable commercial space’ spread over a range of units. The developer insists that 5% of the apartments will be affordable, alongside a 50% reduction in the market rent for the commercial units to help facilitate ‘start-up’ businesses in the creative quarter of Digbeth.

The four-acre site on Camp Hill near Digbeth, where hit TV show Peaky Blinders is filmed, was acquired by Eutopia Homes and Chenavari Investment Managers in 2018 from Mucklow plc.

The new development is designed to cater to the city’s growing workforce and support graduate retention by providing housing for both rent and sale that is ‘well-designed, high-quality and accessibly-priced’.

Jenrick’s approval follows consents in Exeter and Salford for multi-tenure schemes incorporating a mix of Build to Rent and for-sale housing. All three developments are funded by Chenavari Investment Managers and designed by Darling Associates.

Scott Hammond launched Eutopia Homes in 2017 and has since secured a £365 million pipeline of mid-market homes for rent and sale ‘on well-connected sites in core regional cities’.

Previously, Hammond was a co-founder of London rental brand Essential Living and managing director of the company, which was the UK’s first BTR developer and operator, between 2012 and 2017.

“We are pleased the Secretary of State has agreed with the Planning Inspector and Birmingham City Council planning officers – who recommended the application for approval in December 2019 – that permission should be granted,” Hammond said.

“It is a shame that members of the planning committee forced a lengthy delay to important job creation and housing delivery, as well as expenditure of public funds at appeal. Unfortunately, planning committee members often make decisions without relevant training and against clear planning policy, with limited accountability for their decisions.”

He added: “Despite pledging to support growth with a brownfield-first agenda, it was disappointing to see Mayor Andy Street lobby against this scheme which as acknowledged by the Secretary of State and Planning Inspector is in a sustainable location suitable for the development proposed.”

Legal & General Modular Homes has announces that it has acquired and started on site at a major modular homes scheme in Lockleaze, Bristol.

The scheme, developed in conjunction with Bristol City Council, is set to deliver 185 new homes, comprising two to four-bedroom houses, along with one and two-bedroom apartments developed on land at Bonnington Walk. Show homes are scheduled to be on-site and available to look around as early as this summer. 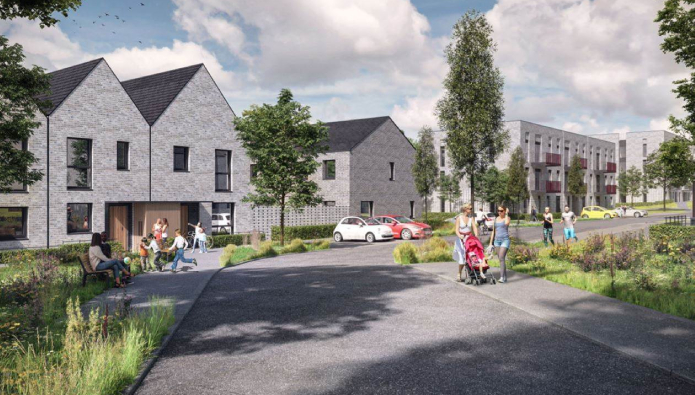 L&G claims this modular scheme will create some of the most energy-efficient homes in the country, with all properties achieving an energy performance certificate (EPC) standard of A.

The combination of Air Source Heat Pumps, Photovoltaic Cells and high-quality build standards will put them in the top 1% for energy performance, meaning significant energy savings for its residents, the firm says.

Once the land is prepared and ready for the modular homes, the homes can be assembled on-site within only eight weeks. Work has already commenced on site clearance, which will be followed by the formation of the new access roads to the site and the construction of roads and sewers, with the first modules to be delivered set to be arriving in summer. 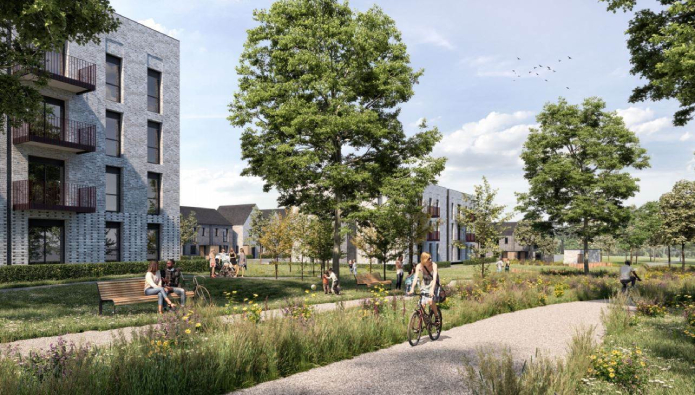 L&G’s modular housing business has continued to grow in recent years and is looking to hire an additional 350 employees throughout 2021, to help deliver its growing pipeline as well as supporting the UK’s recovery post Covid-19.

From its factory in Sherburn-in-Elmet in Yorkshire, L&G Modular Homes aims to provide an innovative approach to the design, production and construction of homes, ‘driving up quality, efficiency and productivity to deliver highly energy-efficient sustainable homes’.

At Bonnington Walk, the company will deliver a full development proposition – from buying land, developing the product and managing the planning application through to delivery.

Rosie Toogood, chief executive of Legal & General Modular Homes, said: “Acquiring and beginning construction on Lockleaze is an exciting milestone for the business as we see our modular homes becoming part of communities across the UK. The modular construction sector is transforming the way homes are built and addressing the housing shortage. This forms part of our purpose of investing society’s capital for society’s benefit.”

The Bonnington Walk scheme has been progressed in collaboration with Bristol City Council as part of the Bristol Housing Festival and consulted on widely by the local community. 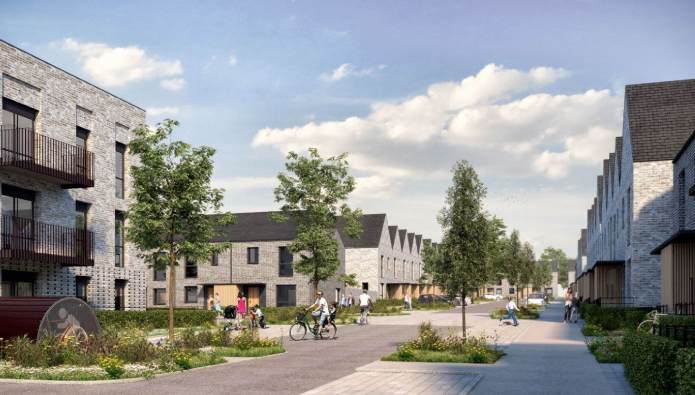 It’s a city where L&G already has a significant investment interest through a £240 million stake in the regeneration of Temple Quarter, a BTR development and a proposed major mixed-use scheme on Temple Island.

Alongside Bonnington Walk, these schemes provide a springboard for a long-term partnership with Bristol City Council, to help it deliver a large proportion of the 16,000 new homes required across the city.