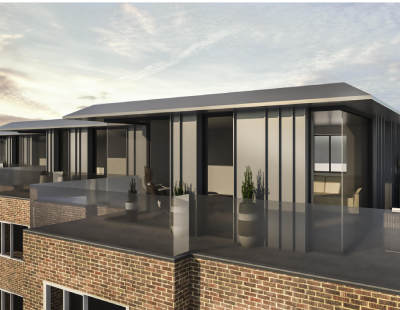 How have the PDR changes relating to airspace development, introduced last summer, affected this sector of the market?

Airspace development has enjoyed increased awareness for a number of years now and more and more projects are being delivered in this way, but the new PDR was a real step change.

That change essentially allowed an ‘in principle’ agreement for upward extensions of two additional storeys on detached blocks of flats. This alone has got more people speaking about airspace development and interest has certainly accelerated as a result.

Housing associations are a key area of opportunity where the potential of airspace could make a significant difference. Those organisations need to expand their housing stock and their existing property portfolios often lend themselves perfectly to the conditions of airspace development – it’s essentially free land!

However, there’s significant opportunity amongst private freeholders, too, and the PDR changes should, I believe, have led to a significant upturn in the number of projects of this kind being completed amongst those property owners as well. That’s not turned out to the be case, though.

Why are so many airspace developments being stalled?

The PDR changes meant that any freeholder could essentially apply for, and often secure, planning approval for a relatively small sum of money. With that go-ahead in place, the perceived value of any rooftop that can be developed on is getting massively inflated which makes acquisition and development financially unviable.

In the last month alone, we’ve been approached by agents marketing rooftops for development where the asking price is in excess of £1 million – before the PDR changes, those same rooftops would have commanded prices not even one fifth of what is being asked now.

When you go on to factor in the design and build costs of a development of this kind, on top of the roof purchase price, there are very few developers who are able to finance such a project. That’s why we’re not seeing more than we currently are.

Has there been a fall in the desire for airspace developments since Covid, as people demand more space and gardens?

I don’t think the pandemic has directly affected the airspace development market to any great extent at all.  If anything, the shift that so many people have spoken about of families moving out of big cities like London has placed greater need on pied a terre-style boltholes.

It’s also worth remembering that airspace development homes don’t lack significantly in either space or outside areas. The homes we’re currently developing in North London are modelled around an open-plan living area with floor to ceiling windows that provide a feeling of true space and light. They also each boast a generous outside balcony area.

How will the expected decline of the high street and office spaces – even post-Covid – affect this sector? Are there opportunities for airspace development here?

The shifts currently underway in both retail and commercial real estate could pose interesting opportunities for greater levels of airspace development as an increasing number of previously commercial buildings are converted to residential use.

Key things to remember, however, include the need to ascertain that the building itself is structurally viable for such a means of development and that it is located in an area that will appeal to future residents. Just because the industry speaks of commercial to residential conversion doesn’t mean it is always the correct path to follow.

How can airspace development quickly contribute to housing supply and what are the potential issues/barriers?

The permitted development changes introduced last year made the viability of airspace development on certain types of building much easier – a move which in itself should help expedite housing delivery.  Simply, with less red tape to navigate, the early stages of a project of this kind should be quicker to now complete.

Added to that, is the fact that a lot of the construction element of airspace development is delivered via off-site manufacturing which reduces on-site timelines.

In terms of barriers, however, I am certain that the grossly inflated asking prices that some freeholders and their agents are placing on rooftops for potential development are the greatest issue the market is currently facing.

We’ve walked away from potential projects because of this very point. The eye-watering asking prices on these rooftops have made these projects financially unviable for us to consider but had they been more realistic, we may well be progressing one or more of those developments by now.

As a solution to this obstacle, we’re keen to promote the benefits of approaching airspace development projects via a joint venture agreement. With this model, no money is exchanged for the purchase of the rooftop, but instead the JV agreement outlines how we, the developer, will manage all aspects of feasibility as well as the planning process with no obligation at that stage on the freeholder to proceed.

Once a go-ahead is agreed, we manage the entire build process and it is only once a project is complete and all costs have been realised, that the profits are shared between us and the building owner.

It is our belief that this leaves the freeholder in a better financial position than if they’d held out for a sale of the airspace rights, as well as continuing to retain a level of control over their entire building – something which they lose when selling the rooftop off.

This is the model we’re following on our Tait House development in Tufnell Park.

What do you make of all the recent government changes – or proposals – on planning?

Any proposals that simplify the planning process should be welcomed when they are set in the context of improving the system, expediting housing delivery and, importantly, maintaining build standards.