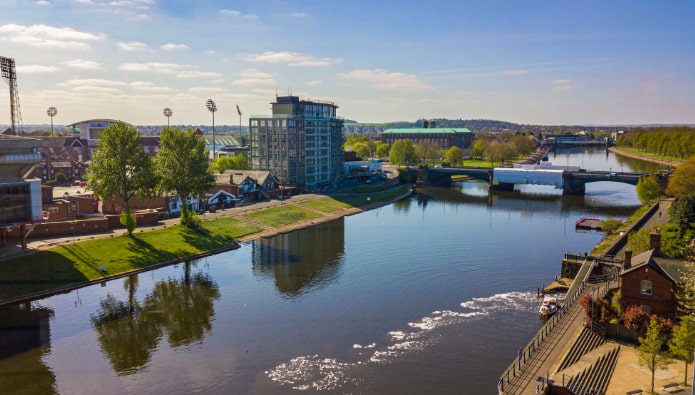 Demand for viewings at Trent Bridge Quays, Elevate Property Group’s luxury development in Nottingham, has surged after a series of ‘hard hat’ site tours and a social media campaign.

Elevate is currently building 95 townhouses and apartments at Trent Bridge Quays and the first release is quickly being snapped up with completion scheduled for late autumn.

Its new micro-site has been designed to give a real insight into what prospective buyers can expect.

The next series of site tours is scheduled on Saturday 12 September by appointment only with agents FHP Living. Some 15 prospective buyers took the tour during the third of the scheduled site walks on August 22 and several reserved a property straight away.

David Hofton, sales and marketing director at Elevate Property Group, comments: “We have already sold 60% of the first release of 38 apartments with three luxury penthouses among the first to be snapped up.”

“Those viewing on Saturday 12 September will also be able to have a sneak preview of a one-bedroom show apartment that is being created and which will really showcase what is on offer at Trent Bridge Quays.”

Prices for the apartments – which feature balconies fronting onto the River Trent – start from £192,500 for a one-bedroom luxury apartment, to £345,000 for a townhouse with three double bedrooms.

The site sits only yards from Meadow Lane Stadium, the ground of National League side Notts County FC. The club holds the status of being the world’s oldest professional association football club with a home strip which inspired Italian giants Juventus.

Trent Bridge Quays also sits across the water from the City Ground, home to Championship club and former European champions Nottingham Forest, and Trent Bridge Cricket Ground, one of the sport’s most iconic venues which dates back to the 1830s.

Hofton says that the current stamp duty holiday and Help to Buy assistance has sparked interest among first-time buyers.

Steve Parker, director of FHP Living, adds: “Whether it is a pent-up demand which built up during lockdown, or a real desire to move home and step up to new level of living, there is definitely a buzz about Trent Bridge Quays and levels of interest have never been higher.”

Phase II is scheduled for completion in Q4 2021 and will include a further 40 apartments and 18 townhouses on the former Muller site on Meadow Lane. Elevate has also just received planning permission for three riverfront duplex apartments overlooking Tinkers Lock.

FHP Living’s hard hat site tour will take place on Saturday 12 September from 10am. To book your viewing, contact Joe Hargreaves at FHP New Homes and Waterside Living Team on 07876 396 008.