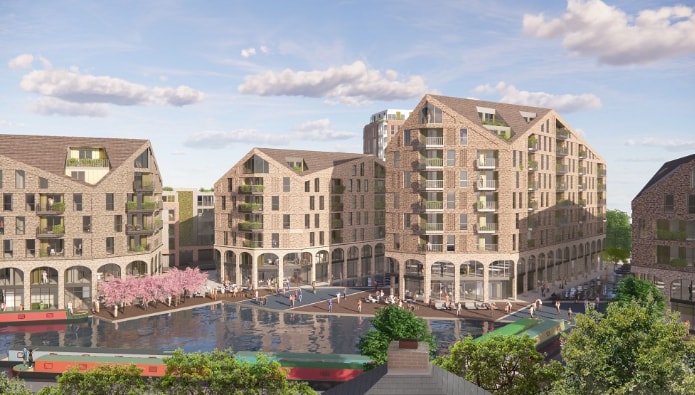 Property Investor Today takes a look at the latest proposals for development projects across the UK, from a new waterside development in Worcester to regeneration in Nottinghamshire.

Plans for a brand new £85 million waterside community in Worcester city centre have been submitted.

Located within the Canalside quarter of the city and just under a five-minute walk from the city centre, the development will provide 33,000 sq ft of home, office and retail space as part of the Worcester City Centre Masterplan.

Designed by award-winning architects Apt, the proposed scheme will feature seven buildings of varied height containing 271 apartments, 30,000 sq ft of office, 9,000 sq ft of retail and 8,400 sq ft of food and entertainment space. It will also provide 465 bicycle storage spaces for residents, a further 218 for public use and 10 electric vehicle (EV) charging points.

Matt Chandler, associate director at Godwin Developments, comments: “We want to breathe new life into this important part of Worcester – building on its industrial heritage to create an exciting residential and commercial development in the centre of the city.”

“Our vision is to deliver a lifestyle-led destination that is similar to other standout schemes – such as Gloucester Docks and Eagles Works in Oxford. We plan to transform the former canals into water features, paying homage to the rich canal history of Worcester and the wider Midlands region. These will provide a focal point of the development and its new waterside apartments, cafes and restaurants, proposed as a part of the scheme.”

Jason Geen, studio leader at Apt, adds: “The project is a ‘regeneration masterplan’ in the truest sense of the word, bringing to life a long overlooked, but important centrally-located site in Worcester. It is ideally positioned for local transport links to enable placemaking and a pedestrian orientated public realm to be at the very heart of the proposals. It’s a fantastic project and one which the Apt studio is very proud to be associated with.”

Keeping up with the current landscape, Lowesmoor Wharf will refurbish some of the existing buildings and provide canal-inspired aspects that form part of the site. The retained buildings and new archway designs will give the scheme a sense of character and identity, while the new public squares and morning/sunset terraces will create pedestrian open spaces.

The developer recently conducted a virtual consultation on the plans with Lowesmoor Regeneration, which invited over 1,000 residents surrounding the site to view the scheme.

According to group land director, Stephen Pratt, it was important that the team at Godwin Developments took time to develop proposals that were not only sympathetic to the site’s location and history, but also maximise its potential and make it an exciting place to live.

Jabba Riaz, Cathedral Ward councillor of Worchester, says: “This is a really welcomed, innovative scheme that has gone through comprehensive consultation. The plans for Lowesmoor Wharf will regenerate a tired and old part of the city, making full use of the canal, which is historic to Worcester. The scheme will increase connectivity, improve air quality and go some way to providing much-needed housing.”

Broxtowe Borough Council has secured an additional £500,000 through the government’s Town Fund Accelerated Funding scheme to begin work on regeneration in Stapleford, Nottingham.

The team behind the scheme has spent the last 10 months preparing submissions for up to £25 million of government funding through the fund, as part of the £3.6 billion that is being invested in 101 towns across the country.

Introduced in June, the government-backed funding scheme is part of the wider economic plan to accelerate infrastructure projects and the area’s financial recovery during the coronavirus pandemic, and was created to support improvements to parks, high streets and transport.

Tim Hallam, councillor for Stapleford south-east and chair of jobs and economy at Broxtowe Borough Council, says: “This additional cash will really help us to move forward with our plans to make much-needed improvements to the area.”

“The town centre has been struggling to attract new customers and businesses for some time, and the initial grant of half a million pounds is the first reward for our significant efforts to improve Stapleford

Key points of the plan include futureproofing the town’s high street, increasing local connectivity, and improvements to community, leisure and recreation facilities.

The proposal is now in its final stages after extensive consultation with residents and local businesses. It will be submitted to the government for agreement in January 2021.

Hallam concludes: “I have no doubt that we can make Stapleford into a thriving centre that residents can once more be proud of and that serves not only the local population, but also visitors from further afield.”