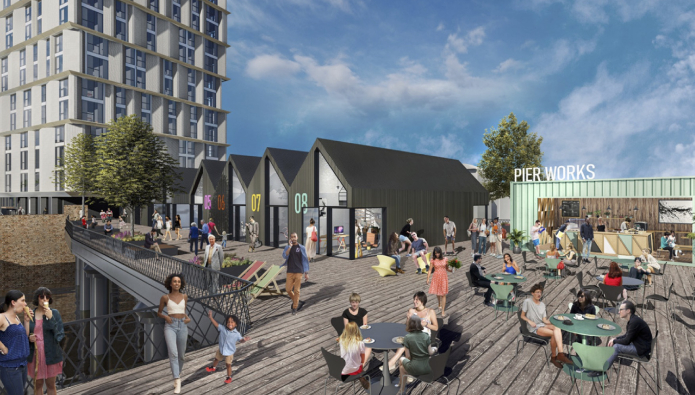 A long-awaited riverside regeneration project has moved a step closer after planning approval was granted for Clifton Slipways, a contemporary mixed-use project on West Street in Gravesend.

Last Wednesday, Gravesham Borough Council approved the application for the landmark scheme, which is aiming to unlock a strategic brownfield site and act as a catalyst for further investment in the town centre.

Led by Quinn Estates, one of the South East’s leading mixed-use developers, Clifton Slipways has been designed by Hollaway, an award-winning architects firm based in Hythe.

The decision by the planning committee represents the culmination of over 18 months of work to create a proposal which delivers significant regeneration benefits and reflects the feedback received during consultation.

At the centre of the scheme is the £2.9 million restoration of the derelict West Street Pier, which has been in disrepair for half a century. A start-up business hub at Pier Works, as well as 2,600 square metres of new public realm and the creation of over 100 long-term jobs, are just part of Quinn Estates’ plans for breathing new life into the historic Victorian pier and reconnecting Gravesend and its residents with the Thames.

Once complete, the scheme will include 227 new one and two-bedroom riverside apartments, which will be just a 10-minute walk from Gravesend train station and its high-speed 24-minute route to London St Pancras.

The wider development will include ‘substantial investment’ in public realm improvements, including traffic calming and wider cycle and footpaths along West Street and Stuart Road. Additionally, the proposals provide for new and improved flood defences to protect Gravesend against the impact of climate change.

Now that the project has been granted planning permission, the firm says there will be a focus on rapid delivery. Construction is planned to start onsite in Q1 2021, while Quinn Estates has worked closely with its local supply chain to ensure the project will deliver local jobs throughout the construction phase.

Ben Geering, development director at Quinn Estates, said: “We are delighted by Gravesham Borough Council’s decision to approve Clifton Slipways. This high-quality scheme can now be at the heart of Gravesend’s regeneration, providing significant investment of over £4.3 million in S106 agreements and providing homes and jobs for the town, supporting local businesses and services.”

He added: “By making the best use of a derelict site to create a landmark development and more than half an acre of riverside public space, the project will reconnect the town and its people with the Thames.”

He said that, over the past 18 months, Quinn Estates has worked proactively to respond to matters raised by consultees and stakeholders and has ensured its proposals reflected them.

“Last night’s vote means we can progress without delay to deliver much-needed riverside regeneration at Clifton Slipways,” he continued. “Construction is planned to start onsite in Q1 2021.”

The Clifton Slipways site has had an extensive planning history and extant consent, which makes it a typical Quinn Estates project, the company says, in taking a difficult scheme that many consider unviable and re-working it to deliver ‘hugely significant economic, environmental and social gains’.

The construction phase of the development will also secure hundreds of direct and indirect jobs for local people, the firm added.

For more information on Clifton Slipways, you can click here.

The recently-introduced stamp duty holiday, announced by Chancellor Rishi Sunak in his summer economic update to boost the recovery of the housing market, has been hailed as an immediate success by a Birmingham-based developer.

Elevate Property Group said 16 properties had been reserved since the Chancellor’s statement on Wednesday 8 July.

David Hofton, sales and marketing director at Elevate, commented: “This was a most welcome injection of positivity into the market. The ‘window of opportunity’ created by the chance to save on stamp duty up to £500,000 until March 31 2021 has created an incentive to buy now, rather than wait.”

Hofton explained that the 16 sales were at Princes Gate in Solihull, Victoria Point, in Ashford, Kent, and at an as-yet unlaunched development for first-time buyers in Birmingham. 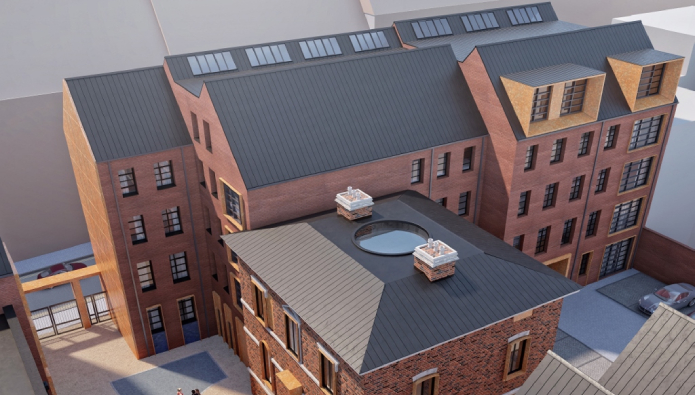 “All of these sites complete before March 31 2021, so are ideal for buyers looking to take advantage of savings, and all come with Help to Buy to provide even stronger incentives to commit,” he said.

Elevate Property Group currently also has developments underway at Trent Bridge Quays in Nottingham, Heaton House Lofts in Birmingham, and Alban House in Hereford, with further projects in the pipeline in Birmingham, Derby, Malvern and Kent.