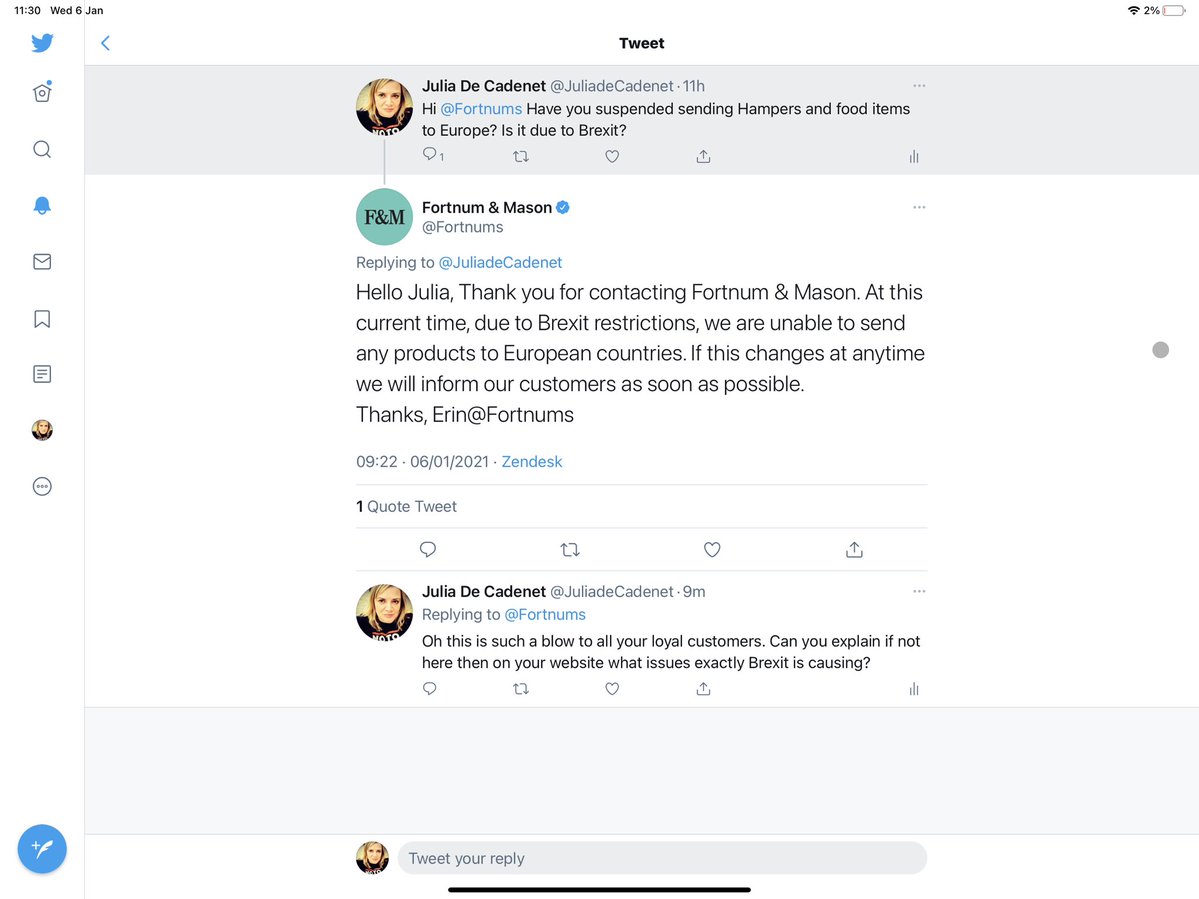 Customers in Europe buying products ranging from furniture to pet food from UK companies are receiving unexpected bills for VAT and customs declarations or finding household names have stopped shipping to the continent, as post-Brexit trading rules bite.

“We bought a €47 [£42] shelf from Next for our bathroom,” said Thom Basely, who lives in Marseille. “On the morning it was supposed to be delivered we received an ‘import duty/tax’ demand for over €30, like a ransom note. It came as a complete surprise.”

A Frankfurt resident who ordered cycle clothing from a UK company was sent a tax and customs demand for €102, while a woman in the Netherlands who bought trousers in December “with no issues” faced a €40 bill for two more pairs ordered in January.

Chris Hickson, a retired logistics and freight forwarding expert living in France, said many people may have been surprised because “they believed the tariff-free trade deal negotiated between the UK and EU meant there would be no extra charges”.

Since the end of the Brexit transition period, however, continental customers must both complete a customs declaration for goods imported from the UK – a procedure generally performed by transporters, for which consumers will be charged, frequently up to €20 per declaration – and pay national VAT.

Other European customers have been informed that such iconic British retailers as the luxury food store Fortnum & Mason were unfortunately “unable to send any products to European countries at this current time, due to Brexit restrictions”.

Until December, the retailer offered EU delivery for many items on sale through its website, including clothes. But anyone requesting shipping to Europe is now greeted by a page stating: “We are no longer taking orders for international delivery.”

Some retailers, such as George at Asda, have promised no additional charges, but several international platforms including Asos have halted deliveries to Europe from their UK sites, instead directing buyers to national versions in, for example, France.

David Martin, who lives in the Creuse region in central France, said he switched his regular order for dog food from the pet supplies company Zooplus to its Irish site after being told the UK platform was no longer accepting orders from the continent.

An “import fees deposit”, meanwhile, is now automatically added to orders from continental Europe placed via Amazon’s UK website, nearly doubling the cost of some items and making it significantly cheaper to find an EU alternative.

Hickson said fees for customs declarations were usually collected by the international shipping companies, such as DHL or UPS, responsible for transporting the goods, with customers notified of the charge – and obliged to pay – before delivery.

“Many vendors are not yet aware that this is the case, or if they are may not be able to say in advance what the bill will be,” he said. “VAT will depend on the category of goods and their value.”

A leading French consumer website cited the example of a pair of trainers ordered from a UK website for £270 but manufactured in and shipped from China, saying customs duty of 16.9% and 20% French VAT would bring their cost to about £378.

And while continental buyers are no longer charged British VAT on UK purchases, they must now pay local VAT in their country of residence – although this is waived for orders under €22 until 31 July. Platforms such as Amazon are entitled to collect continental VAT on orders worth less than €150.

“It’s a hugely complex situation,” Hickson said. “My recommendation to anyone in the EU looking to buy goods in the UK is: don’t order anything until you know what the charges and VAT will be. And be patient. This should all sort itself out eventually, but it’s going to take some time.”