Cladding roundup – BTR re-cladding and the declining appeal of flats 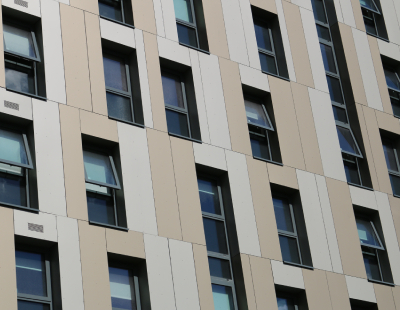 The re-cladding work – which commenced in September 2019 and completed in December 2020 – involved the removal of all original ACM panels and the combustible insulation material behind, as well as the removal of the existing panel support system.

It was also agreed at an early stage that the re-cladding of the property should be used as a ‘positive opportunity’ to change its appearance.

Nick Hurn, asset manager at LaSalle Investment Management, comments: “Our customers’ welfare and wellbeing is paramount, as soon as we found out we needed to re-clad Waterside, we began work immediately and completed within 15 months.”

“The re-cladding team, alongside the strong property management team in Savills, were able to bring peace of mind to many people who live there. This customer centric approach has meant customers like Dr Carnie can continue to enjoy living at Waterside.”

Dr Bruce Carnie, a Waterside Apartments resident of nine years, adds: “Because they (LaSalle) have taken on that cost, we haven’t had to wait to have the work done. Some people have had a terribly anxious time and I’m aware of that, so I do absolutely consider myself very fortunate.”

“I hope that maybe some of the positives that have come out of what’s occurred with this building, that model of action, can be picked up by other apartments.”

Have we fallen out of love with flats since Grenfell?

Since the Grenfell disaster in June 2017 and the ongoing scandal around unsafe cladding that has followed, it’s suspected that many buyers in the market are cautious about living in flats.

Research by London letting agent Benham and Reeves has revealed that this caution has caused both price growth and transactions for flats to fall behind when compared to the overall UK market and the appetite for other property types.

Across England and Wales, the rate of house price growth for flats ground to a halt in the wake of the Grenfell disaster.

Flat values sat at 0% between 2017 and 2018 versus a 1.8% overall uplift in house prices across the wider market and a 2.5% to 2.7% rise for detached and semi-detached homes respectively.

This trend was, of course, more marked in London, where flats fell by 1.6% during the same period.

When analysing transactions during the same year, the figures showed that the overall number of properties sold fell by 1.8% across England and Wales between 2017 and 2018. However, sales specifically regarding flats fell by a more notable -5.2%.

Again, in London, this increase grew to -7.6% versus a decline of -5.6% across the overall London market.

In the three and a half years since the Grenfell tragedy, the average price for flats across England and Wales has increased by just 1.2% a year – the lowest average annual rate of growth of all property types by some margin.

In comparison, detached, semi and terraced homes averaged between 4.3% and 4.5% a year.

In London, the average value of flats has crept up by just 0.1% a year on average since 2017 compared to a 1.3% increase across the London market as a whole.

Since 2017, transactions for all property types have fallen at an average of 15.1% a year. However, this falls further to an average yearly decline of 19.9% for transactions specifically for flats.

In London, the sale of flats has fallen by 20% a year versus between 9% and 12% for other property types.

Is the tide turning?

With lockdown causing many to look to bigger homes, it’s perhaps unsurprising that the number of flats sold dropped 19.9% between 2019 and 2020.

However, the agency said there is a ‘glimmer of hope’ for flat homeowners, with the average price of flat properties in England and Wales climbing a healthy 4.5% in the last year.

A wealth of stock and lower prices also means that flats are presenting great opportunities for homebuyers to get a more affordable foot on the ladder, while also tempting landlords with more favourable yields.

Marc von Grundherr, director of Benham and Reeves, says the way the Grenfell disaster impacted homebuyer confidence is clear when analysing the market for flats both from a transactional view and in terms of the rate of house price growth.

“However,” he says, “the government’s commitment to right the wrongs of unsafe cladding on such buildings has helped to settle the market, with a spotlight on the A1 EWS1 safety certification also helping to reassure buyers.”

“High-quality developments are now reaching the market built to this high safety standard and we’re starting to see a rapid reversal in negative price trends for flats, with strong growth in the last year, despite the increased demand for bigger homes as a result of lockdown restrictions.”

He concludes: “The good news is that the A1 EWS1 certification isn’t confined to new developments alone. There are plenty of existing developments already built to this extremely high standard available on the market now.”

Government’s response to unsafe cladding is lacking, say 75% of people

Some 75% of people believe the government could either have done more (17%) or has not done enough (58%) to ensure the removal of flammable cladding from residential buildings since the Grenfell Tower tragedy in 2017.

The research, conducted by YouGov and commissioned by BECG’s new Building Safety Unit, revealed almost two thirds (64%) of people – including 56% of Conservative voters – back further government support for funding to carry out works on any residential building to bring them in line with current fire safety regulations.

This includes the removal of unsafe cladding on buildings under 18 metres, with 63% of people believing that the height-based allocation of funding so far has been unfair.

According to the study, 62% of Londoners believe that the cladding scandal has affected public confidence in new-build housing, compared to just 40% of people in the North of England and 37% in the Midlands and Wales.

Jennifer Riddell Carpenter, director of the Building Safety Unit at BECG, says the results demonstrate the scale of the challenge for the government as it addresses the ‘systemic fallings’ in the building control system.

“The government’s latest package of support, announced on February 10, extended the funding to remove cladding from buildings over 18 metres to £5 billion, but did not cover buildings beneath this height,” she says.

“This polling, conducted after the extension of funding was announced, demonstrates that the public remains concerned about the fairness of a scheme that does not cover lower-rise buildings whilst supporting further Government funding being made available.”