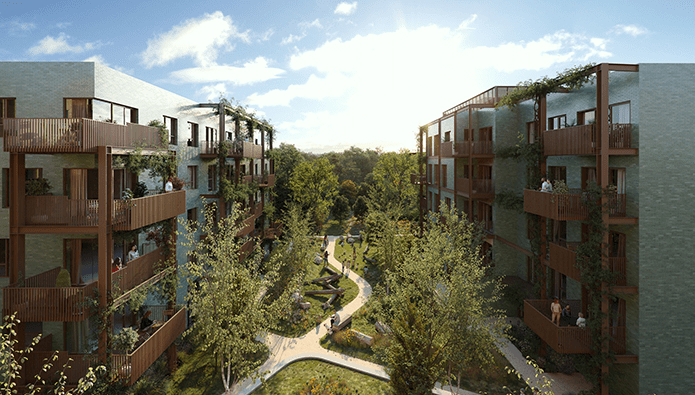 The former Master Brewer Hotel in Hillingdon, which has been left vacant since 2012, has taken a step closer to be being redeveloped to offer 514 new homes, following an intervention from London Mayor Sadiq Khan.

Assembly members heard from planning officers that the scheme would ‘make a significant contribution towards housing and affordable housing delivery targets’.

It was also revealed that Inland Homes would make a £1.365m contribution to improving the bus service for future development.

“This is an important brownfield regeneration project which will help create over 500 new homes, ensuring a positive contribution to housing needs in the London borough of Hillingdon,” Inland Homes chief executive Stephen Wicks said.

“The scheme will benefit the natural environment surrounding the site, creating an attractive landscape. Inland Homes have a strong record of securing planning permission and delivering complex brownfield sites and we look forward to achieving full planning permission.”

Over a third of the new homes (182) would be affordable under the plans, while the development is set to range from between two to eleven storeys. What’s more, it will offer employment opportunities and 1,250 square metres of commercial floor space as well as car and cycle parking.

Local residents will be able to get around their environment without a car thanks to a landscaped public square created in the south-western corner of the site, with extra footpaths through the green belt land to the east.

Inland Homes has agreed to contribute £539,000 towards ecology and landscaping to green belt land east of the site.

The development sits just 200 metres east of Hillingdon tube station – a distinctive white steel structure which towers over the A40 below and offers access to central London in 35 minutes via the Metropolitan and Piccadilly lines.

The site lies between the A40 Western Avenue and Freezeland and is near TfL bus routes to Ickenham, Uxbridge and Oxford, while it is also less than two miles away from the M40 motorway to Oxford and the Midlands.

Additionally, the scheme is close to a GP surgery, local schools, sports and recreation centres, and green open space.

Brokers Hank Zarihs Associates called the project the type of initiative property development lenders would be keen to finance with construction loans.

The final decision over whether the project goes ahead rests with housing secretary Robert Jenrick, who is expected to look at the application shortly.

In October last year, Inland Homes – a company specialising in regenerating brownfield land – submitted a detailed planning application for the scheme to convert the former hotel and pub into new homes.

The area has significant buyer and tenant demand due to its proximity to Heathrow Airport (20 minutes by car) and Brunel University London, which is home to more than 13,000 students.

The site has been without a use for eight years since the hotel was demolished, but there have been several attempts to transform it before now. It was originally earmarked to be a Tesco superstore back in 2014, while it even became home to an abandoned horse for a period during 2015.

For the last 25 years, even while it was still a hotel and pub, developers battled to build a combination of a supermarket, hotel and homes on the site, which was once even being dubbed the ‘Tesco village’.

The troubled site, though, has lay vacant since 2012, and Tesco was forced to give up on its plans in 2015 after financial difficulty, at which point all plans for a supermarket were swapped for a huge residential development.

It’s more than 50 years since the three-star Master Brewer hotel and pub was built, becoming a favourite for those looking for a cheap place to stay on the edges of London. The latest custodians will be hoping 2020 will be the year when the disused site is finally given a purpose again.