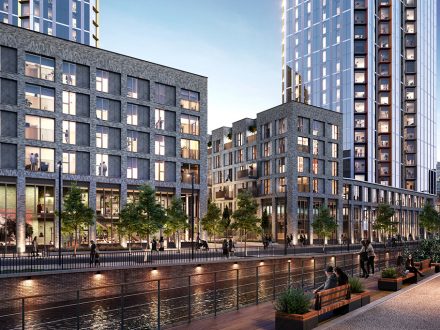 Bam Nuttall has been appointed to deliver a range of infrastructure works for the £4bn Victoria North regeneration programme in Manchester.

Manchester City Council, in a joint venture with Far East Consortium, successfully obtained £51.6m in funding from the UK Government’s Housing Infrastructure Fund (HIF) last year to pay for the works. Launched in July 2017, the HIF backs infrastructure schemes that can aid the creation of new homes.

Bam Nuttall was appointed lead design and build contractor, alongside lead designer Arup, to carry out clearing undeveloped brownfield land across Victoria North, which was previously known as the Northern Gateway scheme, so that it is ready for development, delivering flood-defence works and connecting the sites to existing highways in the area. General road upgrades also form part of the contract, while the team will also create a new five-hectare City River Park along the Irk River Valley.

The team is now preparing detailed designs ahead of submitting a planning application next spring.

The initial works will support the development of more than 5,500 new homes delivered over the next 10 to 15 years, around 1,000 of which will be affordable rent and sale homes.

The entire scheme, worth £4bn, is set to deliver 15,000 new houses across 155 hectares within the next 20 years, along with new transport infrastructure and school facilities.

Turner & Townsend has been appointed project delivery consultant on the job, while Pell Frischmann comes in as design support consultant and VolkerStevin is the flood defence works contractor.

← Home Improvement on a Shoestring Budget has the pandemic killed off the London pro... →