Auction roundup – Record-breaking results to round off January 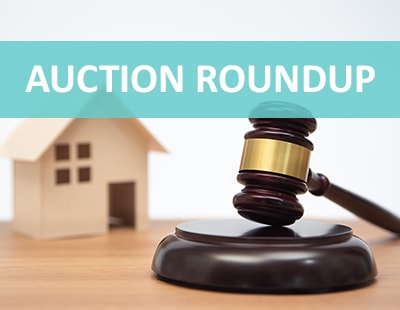 The live-streamed auction continued well into the evening of Thursday 28 January as auctioneer Andrew Parker worked his way through a catalogue of 180-plus residential and commercial lots.

Over 2,000 people registered to bid on the lots, representing an all-time high for the auctioneer – and 69% more than its previous peak in June 2020. The figure aligns with Zoopla’s latest UK House Price Index, which revealed a 13% growth in buyer demand year-on-year.

One of the standout results was achieved in Scotland, where the fire-damaged former Killin Cottage guest house in Dunbartonshire attracted enthusiastic bidding. 10 Lomond Street has been empty since the December 2017 fire and is now ripe for redevelopment. It sold for £160,000 from a guide price of £55,000-plus.

At the other end of the country, bidders were keen to get their hands on a mixed-use property near Southend-on-Sea. 44 Hamlet Court Road in Westcliff-on-Sea comprises a ground-floor retail unit with residential accommodation on the upper two floors and currently realises an annual rental income of £18,110. The property sold for £230,000 from a guide price of £150,000-plus.

Parker comments: “It was certainly a fabulous start to the year as we illustrated once again that we’re keeping the market moving. Lockdown is no barrier to our fast, certain, hassle-free and, above all, safe method of buying and selling properties.”

While figures suggest that supply may be down nationwide, Parker is confident sellers will still turn to auction to achieve a secure sale and already has more than 100 properties instructed for the February Auction Event.

SDL Property Auctions holds Auction Events on the last Thursday of each month, live-streamed from its head office auction studio with remote bidding. These run alongside daily single-lot Timed Auctions on its website.

The first of eight online auctions scheduled for 2021 – an approach which the Sheffield firm has described as ‘ideal’ and ‘successful’ – saw 33 of 36 lots offered go for £4.96 million.

Lots were located in Sheffield, Rotherham, Hull, Chesterfield, Matlock, Epworth and Doncaster, with the highest price on the day reaching £437,000 for a landmark town centre freehold office investment in the centre of Rotherham against a guide price of £350,000.

Several other Sheffield houses sold well above their estimate, including a three-bedroom inner-terrace in need of complete modernisation in Firth Park, with a guide price of £60,000-£70,000, which sold for £90,500.

Meanwhile, a four-bedroom stone-built semi-detached house in need of general modernisation and structural repair in Nether Edge with a guide of £200,000-£225,000 went for £245,000.

Mature woodland of approximately 2.42 acres located in an established residential area off Cobnar Road in Woodseats with a guide price of £10,000 sold for £68,000.

Adrian Little, head of the auction department at Mark Jenkinson and Son, says: “This was our first sale of the year and the level of activity was on a par with the previous three sales last year that each saw over £5 million raised.”

“Our online auctions have been so successful for us and present an approach that brings fairness, accountability and competition – it is ideal for dealing with sales for local authorities, trusts, executors, and so on.”

Another record start to the year at Auction House

Auction House London is reporting a strong start to the year with its best-ever January result.

Despite the traditionally quiet first month of the year, the group sold 61 lots – raising £6.1 million and marking four consecutive months each with sales ahead of the previous year.

Founding director Roger Lake says the continuing hunger for sale by auction is ‘a clear indication’ that sellers and buyers are capitalising on the demand fuelled by the stamp duty holiday.

“Indeed, auctions are now the only remaining method available to ensure buyers benefit from this temporary tax break before it expires on March 31,” he comments.

“The lead time between entering and exchanging contracts is now down to just three weeks at auction, compared to what can be longer than three months by private treaty. We are able to do this because, alongside our regular regional sales all over the UK, we hold a national online auction every Thursday throughout 50 weeks of the year. Being able to offer a speedy sale is a major attraction to vendors who are in a hurry or want to select the specific date on which they sell.”

Lake says that the auction market is currently undergoing massive change, thanks to the increased flexibility offered by live stream and online auctions. He explains: “We are running more regular events to meet the needs of our sellers. We are selling more lots prior to auction when our vendors prefer it, and we are able to tie-up more post-auction sales too. Together with selling on the day, the outcome is a noticeably higher success rate.”

This is underpinned by the number of big-ticket lots entered into Auction House sales in February, each guided at £1 million or more. These include a 20-bed block of apartments in Northamptonshire (£1.5 million), a five-bed semi in London (£1.2 million), and a block of seven flats and two shops in Devon (£1million).

Lake adds: “As you can see, auction is no longer the sole reserve of properties from the bargain-basement. Similarly, the wide range of lots available demonstrates the sheer variety of what can be bought and sold under the hammer.”

“Some commentators are suggesting that the end of the stamp duty holiday means that private treaty demand will collapse over the coming months. At Auction House, we think differently – not only because our entries are priced to sell, but also because our pool of repeat buyers are continuing to purchase regularly. The desire to sell seems stronger than ever; Covid restrictions have highlighted people’s urgency and auction is delivering at an exceptional level.”

Homebuyers look to max out quirky potential at auction

While the UK is in its third lockdown, auction buyers are still showing their hunger to move, with many looking at alternative ways to get more for their money.

Toby Limbrick, director at Network Auctions, has noted the uptick in interest levels for more unusual lots at its forthcoming 11 February online auction.

He comments: “We are seeing more buyers looking for ways to max out their pot and make the most of what they’ve got. This is driving interest in properties that used to be more the domain of a specialised investor/developer.”

One such lot is a building plot in Tilehurst, Reading guided at £85,000-plus. Planning permission was granted for the erection of a new three-bedroom end terraced house in 2019. Once built, the property will be worth in excess of £300,000, meaning a savvy buyer could build a new property for less than a second-hand home.

“With people spending so much time in their homes, we’re seeing an increase of people demanding more from where they live. Space is at an absolute premium and buyers are looking at how they can enhance their lives through where they live,” says Limbrick.

Another standout is a pair of vacant freehold lockup garages with a forecourt situated in a residential area of London, which are set to attract huge attention for their development potential. Situated in the popular E17 neighbourhood, the garages have a guide price of £75,000-plus, a fraction of the usual half-a-million price tag a typical house in this area would cost. The site on Windsor Avenue occupies an area of 0.011 acres.

Limbrick adds: “Increasingly, we are seeing more owner-occupiers in the virtual auction room. Covid doesn’t stop people wanting to upsize or move – potentially it increases the need – but people are having to get creative to enable them to make the finances stack.”