A diamond in the rough: what to know about Lithuania’s property market 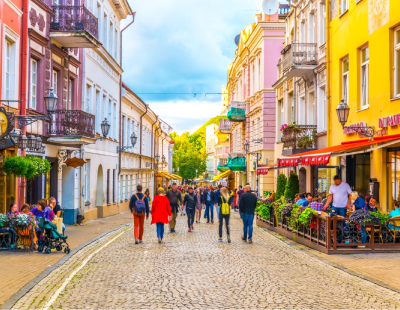 Despite having only around three million inhabitants, Lithuania is punching well above its weight, enjoying years of economic growth. Its architecture that blends elements of Baroque, Gothic and Renaissance, and a wide array of World Heritage sites, have made Lithuania a popular tourist destination.

Over the last few years, its solid economy, rising prices, and a growing number of developments have brought the country into the limelight in the world of real estate as well.

Its rise to prominence has not been solely due to the burgeoning capital city of Vilnius, either. Its second-biggest city, Kaunas, has attracted such international companies as Continental, Hella, Hollister, and Hegelmann, which have significantly increased investment in the manufacturing and logistics sector in the whole Kaunas region.

Let’s take a look at some of the key factors to bear in mind when considering a real estate investment in Lithuania.

A solid economy with niche sectors

FinTech is a particularly successful industry in Lithuania; the number of companies is increasing astronomically. There were 210 companies in the sector as of 2020, with 3,400 jobs being created from them (an increase by 30% from 2019).

In the global business services sector, Vilnius constantly attracts even the biggest names from the Fortune 500, including Moody‘s, AmerisourceBergen, and McKesson.

With nearly 130,000 students, Lithuania moved to a mass higher education system over the last 15 years and now has one of the highest participation and graduation rates in Europe. With this level of education comes a workforce that is affluent and demanding in terms of quality housing. This is part of the reason why residential prices have continued to rise.

Within a year, apartment prices in the five major cities of Lithuania (Vilnius, Kaunas, Klaipeda, Siauliai, and Panevezys) increased on average by 7.2%. In terms of core commercial property, total investments reached an all-time high of  €463 million in 2020, while total investments in the residential sector reached a record €2.3 billion, demonstrating the liquidity of the market.

Potential investors need to be aware that the government expanded the property tax in 2019, which now applies to real estate worth over €150,000. Despite these measures, mortgage loans and the total mortgage loan portfolio in Lithuania have reached new heights, the total value of outstanding residential loans stands at over €8 billion.

However, there’s a potential bump in the road: According to the Bank of Lithuania, an increasing number of people are buying properties on credit, as some have taken out multiple mortgages and fallen behind on payments, despite the relatively stable economy.

Like all other countries in the EU, Lithuania will be operating under the new EU crowdfunding regulations from November this year. Aiming to bring more confidence into the sector, this legislation levels the playing field for diverse crowdfunding platforms.

Subsequently, the crowdfunding revolution could be just around the corner for Lithuania, thanks to some big platforms operating from the country, including NordStreet, PROFITUS, and Röntgen. They have raised a combined project funding of €45 million, yielding average returns of 10%.

However, any income generated inside Lithuania, regardless of residency status, is subject to 15% personal income tax (PIT). In addition, Lithuanian legislation on the sale of new buildings is subject to VAT at a fixed rate of 21%, so investors looking to purchase and sell property quickly will need to be wary of this.

The previous points illustrate how Lithuania is a hidden gem with the potential to be a great option for real estate investors. Investors can be particularly successful if they take their time to explore the different regulations to navigate the market in the most effective way.

Investors need to be particularly aware of both the opportunity which Lithuania offers in terms of the freedom to purchase residential property, but also the imposed taxes on income earned in the country and VAT on future sales of new builds.

*Jan Večerka is CEO of Brikkapp, a research and analysis platform for real estate crowdfunding

← Buy-to-let yields 2021: where are the best postcodes in London? Insight: what you need to know about applying for a holiday let mortgage →